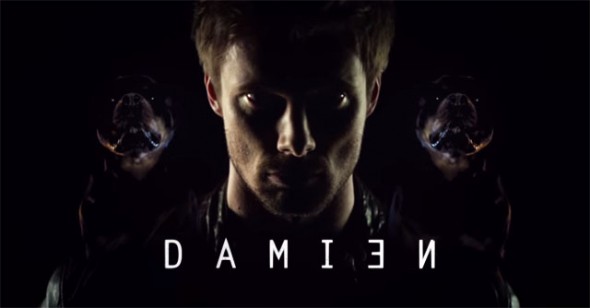 Bradley James enjoyed a long run on his previous TV show, Merlin. How will his new A&E show perform? Will it be a success in the ratings? Cancelled or renewed for season two? Stay tuned.

Based on The Omen feature film, Damien follows the now adult Damien Thorn (James). After experiencing a traumatic event while on assignment in Syria, this acclaimed war photographer is forced to confront his past and face the fact that he is the Antichrist. The rest of the cast includes Barbara Hershey, Scott Wilson, Omid Abtahi, Megalyn Echikunwoke, Robin Weigert, and David Meunier.

5/20 update: Damien has been cancelled and won’t be returning for a second season.

Note: These are the final national numbers and are typically released within 24 hours of the programming or, in the case of weekends and holidays, a couple days later.

What do you think? Do you like the Damien TV series? Do you think it should be cancelled or renewed for a second season?

Plz renew! This was the best episode yet! He is finally reaching his dark side. More episodes like this.

Damien is a very bad show. Acting is bad and stories are stupid.

Now that the Dangerous and Amoral “Trump” has unbelievably come a hair from the greatest throne, the Presidency of the USA, I find watching Damien even more intriguing especially since this man has defied all logic and most importantly…. I really need to see if there really is a “666” stamped underneath that hideous hairdo of his, he never cuts that thing…lol

This is a great show. Im hoping that it gets renewed for another year.

If you’re going to do a series about the incarnation of the devil, it should be something like Damien not Lucifer; more dark and twisty instead of the warm and fuzzy.
Plus the rotties are really creepy.

I… agree, And at the same time I don’t. Reason being that I love Lucifer and just having watched the first episode of Damien it sure seems really good as well.

I agree that a series about the Spawn of Satan should be far darker than Lucifer though, you’re right about that.

Love Love the show!!! Please bring back the show. Its worth a season 2.

Low ratings aside, it deserves a second season. I think it can pick up an audience on Netflix. I made a list of reasons people should be watching Damien. Save Damien! Share it with everyone you know and get people watching! https://amelodythememory.wordpress.com/2016/05/03/sympathy-for-the-devil-10-reasons-you-should-be-watching-damien/

I’m totally hooked. Please renew! Each episode flies by as I’m watching in suspense. Barbara Hershey is great with her subtle creepiness and I like how the eyes of these evil characters like her have just a hint of an eerie glow courtesy of the cinematographer. Bradley James is playing this role in season 1 with a sense of amorality to his personality, he’s really not a “nice guy” as someone may have suggested, but could go either way which makes it interesting… the fact that he seems a lost soul trying to save himself shows hes’s torn in purpose… Read more »

Great show! Bradley James is amazing! Liked him in Merlin and now Damien! THE DEVIL MADE ME DO IT!