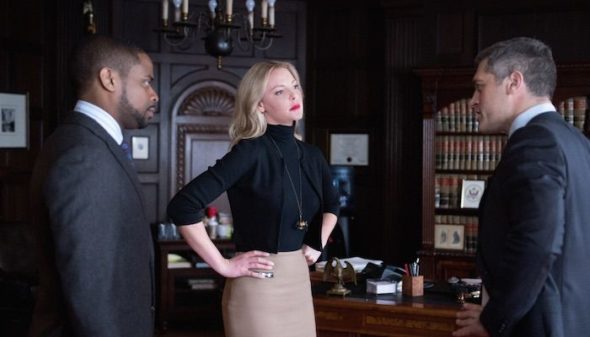 Although there was never really any doubt, CBS has officially cancelled its Doubt TV show. There will be no second season of the legal drama, which went unmentioned (as expected), when CBS announced its schedule for the 2017-18 television season.

Doubt: A Look at the Ratings

The Doubt TV series premiere garnered a mere 0.76 rating in the 18-49 demographic and drew only 5.31 million viewers. This second episode drew a 0.60 and 4.03 million, respectively. Overall, the first season of Doubt averaged a 0.68 rating in the demo and an average audience of 4.67 million. Those numbers just don’t stack up against the other CBS TV shows.

Doubt: Will CBS Air All of Season One?

So far, CBS has not said if they would burn off the remaining episodes this summer. Only the first two are currently available for viewing on CBS.com. If the network announces it will run the rest of the 13 episodes which make up the first season, we will let you know.

The first season of this TV show drama centers on Sadie, a gifted lawyer. She represents pediatric surgeon Billy Brennan, who was recently accused of murdering his girlfriend, 24 years ago. Sadie develops feelings for him and has to hide them from everyone, including her close friend and colleague, Albert Cobb.

Getting involved with Billy could jeopardize Sadie’s career and happiness, particularly if he is guilty. She must work all the harder to prove reasonable doubt, even while she has some doubts of her own.

What do you think? Did you watch the first two episodes of Doubt? Do you think CBS should have given it more than two episodes, before cancelling it

Love the show, they left us with a cliffhanger sure hope there is a season two

I LOVED the series!! So disappointed that it was cancelled….Please reconsider.

I really enjoyed this show and am very disappointed that there will not be a season 2, I’m really surprised it was canceled so quickly knowing many people like to dvr several episodes and then watch them. You gave us the remaining episodes got us hooked and left us with a cliffhanger.

Loved the show and the development of the main characters. I’m disappointed that yet another Katherine Heigl show had been cancelled and I’m irritated to be left with the cliffhanger ending. This is the 4th tv show in the last few years that’s been cancelled with a cliffhanger. I get that these networks are all about ratings, viewings and money but at least have the decency if you are pulling a show to give us a decent ending.

Putting a new show on that late in the year for the first 2 episodes was not the smartest thing to do. We too watched the rest of the series when it went to Saturday nite. We love the show but please oh please bring back more of the old game shows along with some new shows!! Oh and don’t forget to bring back more of the reality shows!! U all cancelled a great show!!

Loved the show…typical TV nonsense, keep the [garbage] reality shows, etc. Judith Light should get an Emmy for her portrayal of Heigl’s mom

I thought the show was amazing! I don’t think you should base ratings on just two shows or viewing only during the first 3 days of broadcasting. There are many binge watchers now that like to wait until several episodes are available to watch at once. Now you are leaving us all hanging. Is he guilty or not!

My wife and I think Doubt is a wonder show, good acting, good stories. We are very disappointed, after watching 12 showings we cannot understand your decision.

I loved the show and all the characters . I am very disappointed it will not be returning.

I am devastated by the cancellation of this series, especially the cliff hanger we were left with. It’s quite sad that it was the first show to have a transgender in a lead role & the relationship. I really hope that the show is resurrected, I live in Aus & streamed it online. I’m sure others are doing the same so the ratings are sure to be higher than the stats that they have.

I really liked the show and was hoping it would continue, especially on Saturday nights when there’s no good tv to watch. I’m bummed it’s been cancelled. I think people would watch it if it was given a chance. I adore Katherine Heigl and the rest of the awesome cast. I hope Katherine finds better luck and scores a hit show… I’d love it if that show was Doubt!

Would have been nice for Doubt fans to have seen a resolution to the cliff hanger ending! But, as usual, we get into a new show and away it goes! Makes me not trust the networks going forward. I understand it’s all about money, but when the decision was made to show the last 13 episodes it would have seemed prudent to reshoot the last episode, or two, and close the story!

Just finished season 1 and am saddened by the cancellation after one season. It was great drama, great characters and great potential. Think CBS should have given this more time.

I loved Doubt! I sure hope someone picks it up and bring it back. It was unique in so many ways with wonderful actors. So bummed the ending left me hanging and now I don’t get to see more!