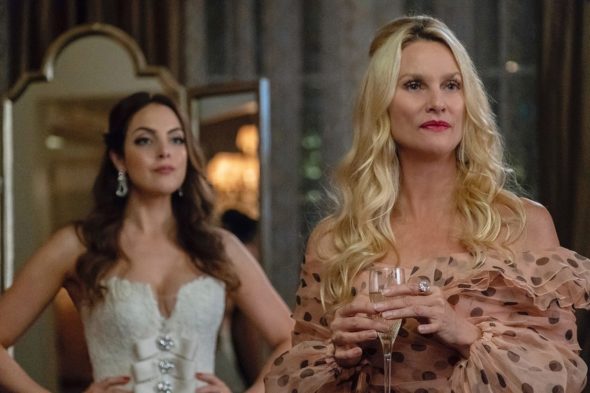 We’ve seen two “Cristal Jennings” in two years of the newer Dynasty TV series. Maybe we’ll see another one in year three. Today, The CW renewed the reboot for a third season which will air as part of the 2019-20 broadcast season.

The second season of Dynasty is averaging a 0.17 rating in the 18-49 demographic and 601,000 viewers. Compared to season one, that’s down by 7% in the demo and down by 12% in viewership. While the ratings are anything but spectacular, we know that The CW has made streaming deals that makes the traditional ratings less significant to the channel’s renewal decisions.

Today, The CW also announced that nine other TV shows had been renewed for the 2019-20 season: Arrow, Black Lightning, Charmed, DC’s Legends of Tomorrow, The Flash, Legacies, Riverdale, Supergirl, and Supernatural. The fates of All American and Roswell, New Mexico have yet to be announced.

What do you think? Do you enjoy the Dynasty TV show on The CW? Are you glad that it’s been renewed for a third season?

Dynasty was addictive could not get enough. Ended with a show stopper. My addiction needs a 3rd series on Netflix

I really enjoy the new Dyansty. I love the character of Blake, Fallon and Sammy Please don’t cancel this fun to watch show.

I love the new Dynasty. I’m like a kid in a candy store waiting for a new episode to come out!

Not as good as the original series. Can’t compare Nicolette with Joan Collins, she lacks the sophistication

I love Dynasty. It’s a throw back to the old night time drama series of the 8O’s . We know it’s fake but still enjoyable in a funny way.

I love it! I was a fan of the original Dynasty and the reboot is really good. I’m loving all the updates that have been made it’s a lot of fun to watch the differences between the original and the reboot.
I was so excited to see Nicolette Sheridan cast as Alexis Carrington she is awesome! Looking forward to many more seasons.

Love this show. I was afraid it would get canceled because of low ratings.
I do wish CW would give it a better time slot maybe that would help give the show the ratings boost that it needs.

BEST NEWS OF THE YEAR YAHHH !

I love Dynasty and I’m so glad it’s coming back!!!

SKSKSKSKSK I’M SOOOO GLAD, I LOVE THIS SHOW SM. I THOUGHT THEY WOULD CANCEL IT. AAAAAAAH I’M SO HAPPYYYYYY

I love Dynasty, so happy they renewed it.