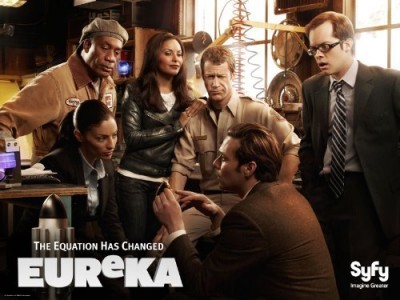 Last week, when it was announced that Syfy had renewed Eureka for a sixth season of just a half dozen episodes, there were reports and speculation that the cable channel was ending the TV series.

Syfy programming head Mark Stern assured Eureka fans that that this wasn’t the case and said, “Bruce Miller and Jaime Paglia have brought a creative vitality to Eureka that has kept it fresh and inventive. Although we do not have a commitment beyond six episodes for the sixth season, we are hopeful that this will not be the end of the franchise.”

Now, the cable channel has changed their tune completely. Syfy has now cancelled plans for a sixth season of Eureka entirely. On top of that, it doesn’t sound very likely that a spin-off or other continuation are in the works either. The cast and crew are currently finishing up shooting season five and that will be the end of the TV show.

The cable channel has released this statement regarding the cancellation: “After painstaking consideration, we have had to make the difficult business decision to not order a season six of Eureka. But Eureka is not over yet. There is a new holiday episode this December and 12 stellar episodes set to debut next year, marking its fifth season and six memorable years on Syfy. The 2012 episodes are some of the best we’ve seen, and will bring this great series to a satisfying end. We are very grateful to Bruce Miller and Jaime Paglia, their team of incredible writers, and an amazing cast and crew who have consistently delivered a series we continue to be very proud of. We thank the fans for their support of this show and know they will enjoy its final season in 2012.”

It sounds like the writers have had time to craft a series finale for Eureka but we’ll have to wait until it airs next summer before we know if it’s a satisfying one.

What do you think? Are you sad to hear that Eureka has been cancelled? Do you think you’ll be satisfied by the series finale?

Eureka really is one of the best shows on SyFy, it would seem that their premis is ‘keep it till people are interested’ then BOOM!!!! Bye bye. There are so few original programmes on TV. We are being driven to choosing between repeats or reality, cheap (and uninteresting). Very sad viewing for the consumer, but fat pay packet for the programmers ( no change there then)

Unbelievable. Eureka is the best thing on SyFy and they’re cancelling it. Someone needs to start a “Save Eureka” campaign so that we can get this beloved show back before our favorite characters move on to other projects. SAVE EUREKA NOW!!

I believe that this is a terrible mistake my grand kids watch this and it has a big influence on them. At least it was not one with blood and guts, monsters and all the stuff that most shows are made about now.

If they are killing this fun and creative show to air more infomercials or wrestling I will be seriously angry! I’m glad they haven’t yet axed WH 13, Haven, Alphas, or Being Human, and have so far promised to bring Merlin back (please!) but with so little original programming and such a hunger among a demo that is not well served outside of the occasional CW or Fox show, you’d think they’d support the type of shows they were named for in the first place.

They will be on Ghost Hunters 3–the even more lame edition instead. I remember when this channel actually had Sci Fi shows. I miss it.

this is one of my favorite shows. i guess now the shows has to be a reality show to stay on.

I am heart broken. 🙁

I truly would rather see reality shows go. or some of the supposed comedy but it’s nothing but sex. Love Eureka, Haven, Warehouse 13, andAlphas. Keep them and junk the others

I am seriously upset about this. There are few enough good tv shows. This has been one of my favorites. There is nothing lighthearted on tv. Its either intense or stupid. This was one show that was right in the middle. Interesting enough to watch and funny enough not to get too serious. There are too many CSI, Law and Order, Criminal intent, cop cop cop lawyer lawyer lawyer. I can watch that on regular news channels.
I hope the execs will reconsider.

Good, make room for more wrestling and very believable paranormal reality shows. Syfy accidentally programmed a few, intelligent, unique shows. I see they are correcting that mistake. Could we maybe get some classic golf and tennis matches from the 1970’s?

I’m so sad that the show is ending! It’s one of the wittiest shows on television and never fails to be entertaining. I hope they change their minds! 🙁

With such lousy shows on television these days, it’s sad to see something that’s worth watching be cancelled. Would rather see the stupid, brainless reality programs go.

Unfortunately, all the stupid, brainless people keep watching those reality shows, which are a lot cheaper for them to make, so TV is just going to keep going downhill.

At least we can still buy most of our old favorites on DVD to re-watch them… but that’s going to get old after a while. ^_^;;

A plague on the network execs of SyFy. This is a show that will be greatly missed.