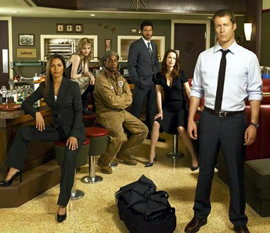 TV show description:
At the end of World War II, the U.S. government created the top-secret community of Eureka, somewhere in the Pacific Northwest. The nation’s most brilliant scientists and their families are relocated there so that they can develop their inventions in seclusion.

While driving his rebellious teenage daughter Zoe (Jordan Hinson) back to her mother’s home in Los Angeles, Deputy U.S. Marshal Jack Carter (Colin Ferguson) crashes his car and stumbles upon the town. Soon after, a faulty experiment cripples the Eureka sheriff and Carter is quickly drafted to fill the vacancy. Despite being the least intelligent resident (in a town full of super-geniuses), Carter’s street smarts and wit repeatedly save the town, and even the world.

Series Finale:
Episode #78 — Just Another Day
Adjusting to reality after all of your friends have been turned into evil clones then returned to their normal selves is hard enough, but when everyone has to pack their life’s work out of the facility and town that they’ve called home for so long, emotions are as volatile as some of the experimental weapons built in Eureka. Jo and Zane are holding back from telling each other how much they care, making the other think that they don’t care, and Carter just seems pleased that he won’t have to save the lives of hundreds on a weekly basis.

Fargo’s despondence is ramped into anger when the Department of Defense movers show up, six weeks early. Zoe returns to say goodbye to everyone, and as Carter drives her back to town, they get a shortcut thanks to a passing wormhole and land right in the rotunda of GD, where Fargo has used a strong force amplifier to lock himself to the ground. He won’t move until the DOD reverses their position.

Zane downloads some data regarding Grace and Old Henry, attempting to find a way to contact Beverly Barlowe so that she can free Grace. The data download will probably go unnoticed, since a new, unstable wormhole has appeared, and sliced off a piece of Parrish’s skin as he walked through. When the slicing action happens again – this time to Andy – they realize it’s because wormholes are appearing willy-nilly and intersecting with one another. An ill-packed piece of equipment is to blame, amplified by Zane’s use of the quantum teleportation data stream (the location of the data on Grace and Beverly). The same data stream can be used to bring all the wormholes together, though, and cause them to implode and neutralize each other – theoretically.

But theory isn’t practice, and the wormholes need another boost. Jack volunteers to take Fargo’s strong force amplifier into the wormhole, a move that will either destroy him, save the town, or both.

As he flies through the wormhole, he sees visions of his past, his present… and could that be his future? His body slams down on the lawn beside the Archimedes statue, and Henry rushes to his side. Jack is safe, but Eureka is still being packed up.

Or is it? Fargo made a call to Trevor Grant, that founder of Eureka who hitched a ride through time with Jack and the others, and convinced him to invest in Eureka. Thanks to his significant foresight in the stock market, Grant has a lavish fortune to invest in the riskiest plan ever: a new Eureka, with Henry at the helm. Fargo is stepping down, since Holly, who has regained her love for Fargo, if not all the memories of their relationship, offered him a job on a top-secret project.

Henry’s happiness is complete since his contact with Beverly was successful: she turned in Senator Wen in exchange for Grace. Jo proposes to Zane, and he wholeheartedly accepts. And Allison is thrilled that Jack wants to stay in the new Eureka, and adds to their happiness by telling him that she’s pregnant.

As Jack takes Zoe to the airport, they pass a mysterious vehicle on the road. Looking closer, they see themselves entering the town on that fateful night when they first came to Eureka years ago. Seeing yourself from years ago is a strange sight in any place but Eureka. Courtesy Syfy.
First aired: July 16, 2012

What do you think? Are you happy with the way that the Eureka TV series ended? Were any significant plotlines left unresolved in your mind? How would you have ended the show?

Should never have been cancelled. Greatest show ever.

I saw this show for the first time and i loved it. Please bring it back. I hate reality shows…far from reality.

I saw this series in our library. Totally hooked! Too bad the season is over

I binge watched this series on Netflix, and couldn’t pull myself away. Unfortunately, this show had a lot of life left in it when the Comcast bean counters decided to pull the plug. I guess if the show could have continued with the special effects in Claymation, they might still be on the air. Seems too many popular TV series are cancelled because bean counters get involved. In other words, the hell with public opinion, gotta keep the stockholders happy. It was probably replaced with some stupid reality show that they want to shove down our throats.

Not happy it is ending

If Comcast can’t find away to make this work (make it a special broadcast funded by Comcast)
I’am sure a lot of clients will switch to another cable service, I would.

Ive watched all the shows.have all the videos, the best show ever you don’t have to have to have sex, stupid reality shows or wrestling for people to watch. Ready to quit watching syfy altogether. hope they somehow come back

We are disappointed they have cancelled Eureka. Just goes to Congress isn’ t the only one making really stupid decisions.
We have stopped watching anything associated with Comcast HUA,

You know it always seems to come down to money for good entertainment and do not like that Comcast sees fit to cancel a show that is doing well because it costs to much money to produce.My main question to Comcast is when is enough money enough money.I enjoyed this show and and am very sorry that it was canceled .I hope it comes back maybe on another network with a vision like the Sci Fi Channel had .It was good work on all parts.