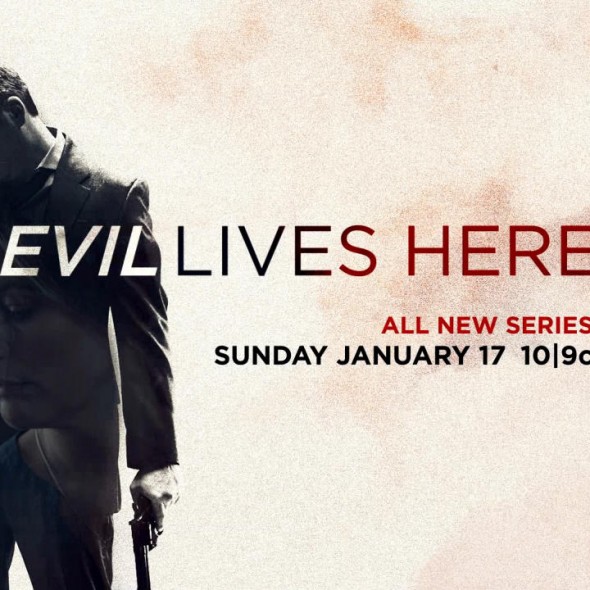 –Families Tell Their Stories for the First Time Ever in All-New Series Premiering Sunday, January 17 at 10/9c –

(Silver Spring, Md.) – What if the person closest to you was a devil in disguise – would you see the signs? Investigation Discovery’s all-new original series EVIL LIVES HERE explores the true, heart-stopping stories of people who shared a home and a life with a loved one who would become a killer. Premiering Sunday, January 17 at 10/9c, with exclusive interviews and never-before-told accounts of the years and critical moments leading up to these vicious acts, EVIL LIVES HERE showcases the devastating and often undiscussed consequences on the people who have nurtured, loved and raised a murderer.

“What would you do if you discovered a potential killer lived in your home? We’d all like to think that we would, somehow, prevent their future malevolence – but through the heartbreaking and astonishingly raw narratives in EVIL LIVES HERE, viewers will realize that it’s not always quite so simple,” said Henry Schleiff, Group President, Investigation Discovery, American Heroes Channel and Destination America. “Indeed, the families, friends and loved ones of a killer are often victims in their own right – and, ID is honored to share their unique perspective with our audience.”

Each hour-long episode of this chilling psychological drama tells the harrowing, firsthand stories of living with a person who became a killer. Viewers will be put in the shoes of the loved one, who lived through this incredible experience – from first noticing that something is amiss, to interpreting all of the puzzling signs and clues, to eventually coming face-to-face with the horrible truth: that the person they loved, the person they trusted, has a very dark side.

In the premiere episode of EVIL LIVES HERE, Ronald Hawkins and Candace Sims exclusively open up about their son, Robbie, for the very first time. In December 2007, Robbie killed nine people – including himself – in a mass shooting at a mall in Omaha, Nebraska. Eight years later, Hawkins and Sims share their intimate insights and personal experiences from throughout Robbie’s life, detailing everything from their past attempts to help him, to that awful day he committed a crime that shook the nation.

My Brother’s Secret Premieres Sunday, January 24 at 10/9c Danyall White tells the gripping true story of her brother Richard. Danyall always thought he was a prankster and a storyteller – but when his tales became increasingly violent, she slowly realized that her brother was hiding a monstrous secret.

Cheating Death Premieres Sunday, January 31 at 10/9c Cathy thought she had found the man of her dreams in Peter Tobin – but by the time she discovered his dark secret, it was too late. How would she keep herself and her son alive long enough to escape an evil man?

The Prophet Premieres Sunday, February 14 at 10/9c To Kevin Currie, Mormon prophet Jeffrey Lundgren was more than a spiritual leader – he was a brother. But before long, Kevin realized that this Man of God was really a devil in disguise with an evil plan.

In Love with the Devil Premieres Sunday, February 21 at 10/9c Bernadette was 17 years old when her boyfriend, Brian Sugrim, told her he had murdered someone – but she didn’t believe him. Only years later would she realize the true evil that Brian was capable of.

Home Sweet Nightmare Premieres Sunday, February 28 at 10/9c Sheila Janutolo dreaded being alone with her husband Jim Cruz and over the years, she had learned to fear him and his violent temper. But when she got a call that he’d been arrested for a ghastly crime, she was certain police had the wrong man.

Investigation Discovery (ID) is the leading mystery-and-suspense network on television. From harrowing crimes and salacious scandals to the in-depth investigations and heart-breaking mysteries that result, the “always revealing” network challenges our everyday understanding of culture, society and the human condition. One of our nation’s fastest growing cable networks, ID delivers the highest-quality programming to 85 million U.S. households and is available in both high definition (HD) and standard definition (SD). For more information, please visit InvestigationDiscovery.com, facebook.com/InvestigationDiscovery, or twitter.com/DiscoveryID. Investigation Discovery is part of Discovery Communications (Nasdaq: DISCA, DISCB, DISCK), the world’s #1 pay-TV programmer reaching nearly 3 billion cumulative subscribers in 220 countries and territories.

Are you a fan of the true crime genre? Do you like the sound of the Evil Lives Here TV show? Do you plan to check it out? Let us know, in the comments.