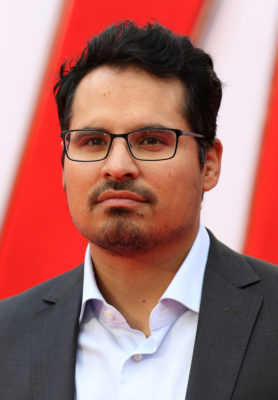 Michael Peña is headed to Fantasy Island. Deadline reports the Narcos: Mexico star has joined the upcoming movie based on the ABC TV show.

The series starred Ricardo Montalban as Mr. Roarke, a mysterious figure who runs an island where visitors can realize their greatest fantasies. The cast also included Hervé Villechaize, Wendy Schaal, and Christopher Hewett. The show ran on ABC from 1977 to 1984.

Peña will be playing the lead, Mr. Roarke, in Sony Pictures’ upcoming film adaptation of Fantasy Island. A premiere date has not yet been announced.

What do you think? Are you a fan of the Fantasy Island series? Will you watch the movie?

Although I think he’s a great actor. I agree with the rest of the bandwagon. I’d rather see someone like at least Benjamin Bratt get this part. Me. Roarke was a very smooth character and I just don’t see that in Peña. Don’t take it personal Mr. Peña, with all respect, I think you’re a great actor and you’ve been cast in some great parts.
Best of luck!

The original Fantasy Island was bad enough, and now a remake. How low can it go?

yes– I would definitely watch the show. It was a lot of fun.

Yeah, he doesn’t fit the type. But the bigger question is…who will be Tattoo? Won’t be Verne Troyer unfortunately.

As much as I like Michael Peña, he just isn’t the right actor for the job.

They need to find somebody who can embody the character that Ricardo Montalban created.