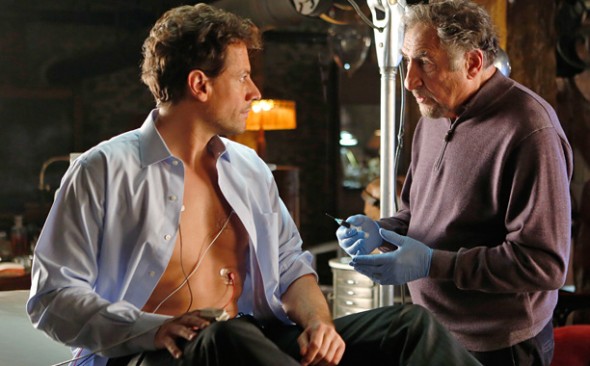 Doctor Henry Morgan may be immortal but his TV show isn’t. ABC has cancelled the Forever TV series after one season of 22 episodes.

On the Forever TV show, New York City’s star medical examiner (Ioan Gruffudd) can ascertain things that most can not because of his vast experience — he’s been alive for 200 years but can’t figure out the how or the why. The rest of the cast includes Alana de la Garza, Lorraine Toussaint, Donnie Keshawarz, Joel David Moore, and Judd Hirsch.

The series debuted last September to a 1.5 rating in the 18-49 demographic with 8.26 million viewers. The ratings grew for episode two but they started falling after that.

Though the Forever series had some very passionate fans, that devotion didn’t translate into positive ratings. The numbers were pretty poor for much of the season and the show ended up averaging a 1.12 rating in the 18-49 demographic with 4.93 million viewers.

As a result, ABC has decided against ordering a second season of Forever. The last episode aired earlier this week and unfortunately left viewers with lots of unanswered questions.

I am extremely disappointed to hear that ABC cancelled Forever. It was the first show in years that kept me hanging on for each word. Each one hour episode seemed to fly by. Please, someone with some sense, pick up this series and continue it. There is so much more that can be told.

please please reconsider this .Forever is such a good show with fantastic actors and millions more stories to tell

ABC has really let down their viewers. They could take steps to promote this wonderful show, or put it in a better time slot. They can make it work, but instead they will make room for yet another brainless reality show. I have bad news for ABC: those 20 somethings who are watching the reality shows are going to grow up. And you won’t have any good characters or programs for them to follow. It takes time for a show to mature, and Forever had matured nicely in its first year. The writing was good and the casting was great…… Read more »

PLEASE RECONSIDER THIS ? FOREVER IS SUCH A GOOD SHOW WITH ALL GOOD ACTORS AND DOZENS MORE STORIES TO TELL ???

stupid cryptic, cancelled forever…. i like that show!!!!! put it back on this show!!!!

Too bad. I really liked this one. Wish they might reconsider.

Please don’t cancel. Forever is one of my favorite new shows. It is sooooo
good and it’s different from a lot of those boring reality shows. Why
would you cancel such a great show?

ABC, why did you have to Journeyman this show? I hate you.

Great show!! Another one bites the dust!! Idiot running the networks!! Hopefully Netflix or Hulu can help us fans and pick it up for season 2

Another one bites the dust!!! Good show but not good enough thanks to the idiots that run the networks!!! Hopefully Netflix or Hulu can see the show for what it is good tv!!!

I really liked the show and think it deserved a longer trial. Alana De La Garza is beautiful and she is good on show. Judd Hirsch is always good and Joel David Moore that used to be in series “Bones” was very good in assistant medical examiner character. I know it was not logical plot but I really enjoyed the show. I hate reality TV shows and stupid comedies that portray all adults as fools and self centered people.

NO, NO, NO, NO YOU CANNOT CANCEL FOREVER ! I WATCH IT EVERY WEEK AND I LOVE THE SHOW. GIVE IT A CHANCE, AFTER JUST ONE SEASON YOU PULL THE
PLUG ?

PLEASE RECONSIDER THIS MORONIC DECISION, MAYBE SOMEBODY SMARTER, WILL PICK IT UP.

THIS IS THE LAST TIME I EVER WATCH A NEW SHOW ON ABC….DONE!!!! they never give any shows a chance. This was one of the best new shows this season. But, I guess, if it is not a stupid reality show, ABC is not interested in good programming….Cable HERE I COME!!

YES DEE, WE NOW HAVE A RED NECK SHOW FULL OF IGNORANT BEASTS, POLKA, SIMPSONS, KARDASHIANS (A BUNCH OF WHORES WITH IQ’S IN THE NEGATIVE LEVEL) I’M WITH YOU, NO MORE ABC SHOWS FOR ME EVER !!!