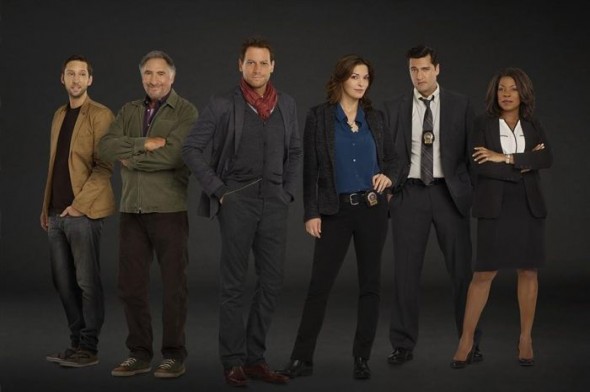 TV show description:
A fantasy crime drama, this TV series follows New York City’s star medical examiner — Doctor Henry Morgan (Ioan Gruffudd), handsome man with a secret past. No matter how hard he tries, Henry can’t age even a single day — he’s immortal. He doesn’t know much about what happens when he “dies” except that everything on him disappears and he reemerges in a body of water, naked.

Henry doesn’t just study the dead to solve criminal cases however. He does it to try to solve the mystery that has eluded him for 200 years — the reason for his own inexplicable immortality.

Henry’s long life has given him remarkable observation skills which impresses his new partner, Detective Jo Martinez (Alana De La Garza). This piques her curiosity about who he is. Each new case and their budding friendship reveal layers of Henry’s long and colorful past. Jo’s sharp, no-nonsense instincts and her ability to close difficult cases have given her a tough-as-nails reputation on the force, despite also dealing with the untimely loss of her husband.

Lucas Wan (Joel David Moore) is a twenty-something self-proclaimed “artisan of death” and Henry’s worshipful assistant. He considers mortuary science an art, and Henry its Picasso. After transplanting to New York City from rural Ohio, Lucas worked up the courage to introduce himself to the star medical examiner at a crime scene.

A Brooklyn native, Detective Hanson (Donnie Keshawarz) works alongside Jo and has worked his way up to the NYPD’s elite squad of homicide detectives. He’s a family man who lives with his wife and two children in Queens. Unafraid of bending the rules to get the job done, Hanson is sometimes skeptical of Henry’s talent but often admires its effectiveness.

No one knows Henry better than his best friend and confidant, an antique shop owner named Abe (Judd Hirsch). The keeper of Henry’s immortality secret, Abe’s “carpe diem” philosophy inspires Henry to get more in touch with the beauty of living. Abe is not immortal but he is determined to make the most out of every moment of life.

Series Finale:
Episode #22 — The Last Death of Henry Morgan
Henry and Adam have been on a long, unrelenting collision course, which is about to come to a head – possibly bringing about one man’s death – with only Jo standing in the way. Henry and Jo’s murder investigation into a museum worker’s death centers on a priceless missing ancient dagger, which not only ended the life of Julius Caesar, but also killed Adam the first time.
Meanwhile, Adam knows that there is something that Henry fears more than death – that Jo might discover his mystery. The two men tangle in a tumultuous game-changing confrontation.
First aired: May 5, 2015.

What do you think? Do you like the Forever TV show? Do you think it should have been cancelled or renewed for a second season?

Really enjoyed Forever. Probably one of my most favorite Crime Drama’s with Bones and Castle. It was canceled way to soon. Would be awesome if it could make a come back rather then having to watch repetitive non-sense that’s on today.

I was extremely upset when I heard that this show was to be axed. I think it is very entertaining and so please bring it back.

Yes, I totally agree with Matt’s comment above. I love that show and wish that it will be back soon. It’s the rare show that I longed to watch on TV.

I also agree with Matt above. It is so rare for my husband and I to both love the same show. We just discovered this show….

I’ve just watched forever, I’m quite anoyed you have stopped making it! Shame on you. What a fantastic season. BRING IT BACK!!

I agree with previous comments; I loved Forever and wish it was still on.

I really loved Forever, and wish it had a second season, but if they’re never going to give us one, then wish that they would at least give us like a movie or something to answer all our questions and end it for good.

Just caught this on CW and LOVED every episode. Every episode had good acting/actors and decent plots. For the life of me I cant see why it would be canceled when there are far worse shows with multiple seasons. Although it ended abruptly at season 1, I can use my imagination to see Jo’s reaction to Henry’s secret. Would have been nice to see the explanation to her onscreen though. Count me as another vote for season 2 or more.

I loved it and really wish they would bring it back, cuz I have so many questions that need answered! I binged this show and I’m absolutely hooked! Please make season two happen.

One of the best shows with a great storyline.
It kept you immersed in it every moment.
Why did it get canceled? Why do any of the great
shows get canceled? Just look at most of the new
programs that are being broadcast now!!
I just buy the DVD’s & watch reruns!!
This world is not my home— just passing
through!!
God bless

I loved this program and it was building up only to be cut down. I just cannot believe it. And it has left us with a huge question, so what happened next?

This was a very good TV series. I loved it to the core. Well, I don’t know why it suddenly was given a cold shoulder. I would love the program to go on. Perhaps see the intriguing story-line behind the good doctor’s immortality. It ended so abruptly and one did not get the chance to know how it all ends. May be you could make some provision for a write up so we rather read it, if we cannot watch.

Forever was great program; really can’t understand decision process on current series selections to be cut. I guess I will just be doing more Reading and a whole lot less TV.

You and a lot more of us, maybe the program was not inane or stupid enough.

I love this show and it was one of the best shows on TV. It was a brilliant story with an amazing cast!!!! It was a tragic mistake to cancel it!!!! I pray every day that it will come back as there are so many stories to be told!!! I really miss this show!!!!!!

Finally an intelligent,clever well acted show. The cast really made you feel for the characters. Clever stories and something that my whole family enjoyed watching. So sick of reality crap & bad behavior.

This was a great show. Inventive, creative and well done. I’m STILL peeved that it was cancelled!!!!