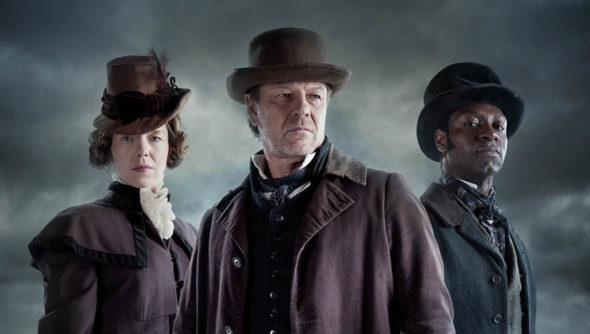 What do you think of Inspector John Marlott in the first season of The Frankenstein Chronicles TV show on Netflix? Usually, the Nielsen ratings play a big role in determining whether TV shows are cancelled or renewed. Netflix and other streaming platforms, however, collect their own data. If you’ve been watching this TV series, we’d love to know how you feel about The Frankenstein Chronicles season one episodes. We invite you to rate them for us here.

A Netflix horror-crime drama inspired by Mary Shelley’s Frankenstein novel, The Frankenstein Chronicles stars Sean Bean, Tom Ward, Richie Campbell, Ed Stoppard, Vanessa Kirby, Ryan Sampson, Robbie Gee, Anna Maxwell Martin, Charlie Creed-Miles, Eloise Smything, Samuel West, Mark Bazeley, Elliot Cowan, Katie Dickie, Steven Berkoff, and Deirdre Mullins. The story centers on Inspector John Marlott. After stumbling upon an oddly sutured corpse, Marlott is recruited to investigate whether it was planted there as a political act, or if something more sinister is afoot. He is eager to track and find the person who committed this unspeakable crime. As the investigation unfolds though, Marlott soon realizes that he is dealing with something more heinous than he’d dared to imagine.

This is an amazing series. It is mesmerizing. Please continue with season3, and 4, and 5, etc.

Please keep the series going! This is a fantastic story! Not many like this and so worth the wait. But please continues it! Sean bean is incredible!

Love this series needs to be continued, more series in this style are needed

Jut a deep, just as dark, AND don’t Americanize it

This show is bingeably delicious!

I would love to see a second season of this show. It’s different and holds your attention for each and every episode.