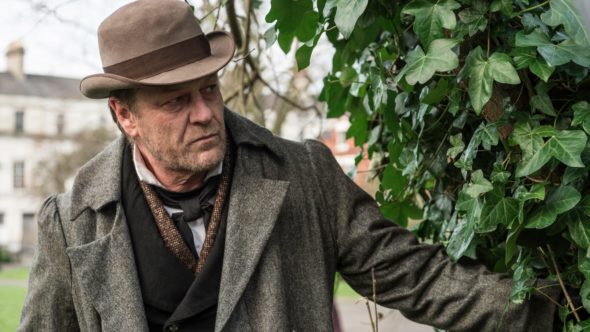 In Inspector John Marlott still on the case? Has The Frankenstein Chronicles TV show been cancelled or renewed for a third season on Netflix? The television vulture is watching all the latest TV cancellation and renewal news, so this page is the place to track the status of The Frankenstein Chronicles, season three. Bookmark it, or subscribe for the latest updates. Remember, the television vulture is watching your shows. Are you?

A Netflix horror-crime drama, The Frankenstein Chronicles stars Sean Bean, Richie Campbell, Vanessa Kirby, Eloise Smyth, Elliot Cowan, Tom Ward, Ryan Sampson, Laurence Fox, Paul Kennedy, Martin McCann, Charlie Creed-Miles, Stuart Graham, Jessie Ross, Ed Stoppard, and Lucy Cray-Miller. The story centers on Inspector John Marlott. After stumbling upon an oddly sutured corpse, Marlott is recruited to investigate whether it was planted there as a political act, or if something more sinister is afoot. Marlott is eager to track and find the person who committed this unspeakable crime. As the investigation unfolds though, he soon realizes that he is dealing with something more heinous than he’d dared to imagine.

Because we won’t know viewership rates, unless they decide to release them, this is where I’d usually say it’s hard to predict whether Netflix will cancel or renew The Frankenstein Chronicles for season three. And that it is, but the situation is even more complicated than usual.

The first two seasons of this British drama premiered on ITV Encore — a British network which will become an on-demand platform, in Spring 2018. In October of 2015, A&E originally picked up the US rights to the first season, but never ran it. Finally, in December of 2017, Netflix picked up the global rights, but Variety reports distributor Endemol Shine International has already licensed it in some markets. Reportedly, Netflix will eventually get those markets too, once those deals have expired.

The bottom line: Netflix could pick up additional seasons, should it perform well for them. We’ll just have to wait and see. For now, I’ll keep an eye on the trades, update this page with breaking developments, and seek a less complicated supper. Subscribe for free alerts on The Frankenstein Chronicles cancellation and renewal news.

What do you think? Do you hope The Frankenstein Chronicles TV show will be renewed for season three? How would you feel if Netflix cancelled this TV series, instead?

Oh please, there has to be more, loved it, PleaSe you guys I mean come on, don’t leave us hanging like this!!!

Fantastic. When series two finished was so disappointed and left unsatisfied with finish. I found it addictive watching especially as we were in lockdown.needs another series to perhaps finalise the storey.

Yes. Please. This had me gripped to my chair. I don’t understand why it hasns’t continued. I’m rather disappointed its taking so long.

Just finished the first 2 seasons and loved it! Please renew it!

Yes!!!! Please! Would love to see where this show could go!!!

Please another season!!! There is so many places the story line can go. Right now it is hanging and I need more!

Frankenstein Chronicles has to come back or I will die just like everyone in the series does!!!

Hope to see more seasons if The Frankenstein Chronicles. Sean Beam is just excellent in his role which has made the series so gripping. Looking forward to some good news in 2020!!

Sean is amazing in this role!! And Robbie Gee’s character is one of those you end up hating that you love!