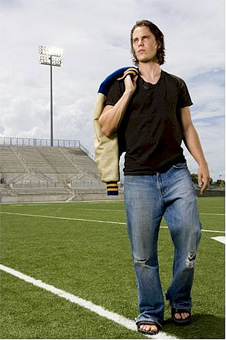 Best show I’ve seen in a very long time…I watched all 5 seasons on netflix and I’m very sad to see it end…cheers to the cast and crew…great job..

********, this had been the best tv show I have ever seen, **** ratings this show is ethical, relative and a inspirational to whoever watched it seriously , “if i had 1 wish it’ll be to have more wishes”. But one would be a season 6 it’s just people catch on to good shows late, just like trends and topics and people never appreciate what they have until its gone.

Very sad to see we do not have season 6…… It has been a great show. We need more shows like this.

Loved all 5 seasons of this show and would love to see a 6th. There is still so many stories that can be told. I want to know the future lives of Tim, of Tyra, of Becky and Luke, Lyla, Landry, and all the characters that I have come to know.

I recently watched the entire series. and started thinking this could be ok and one short week later I’ve seen it all. and to be honest I feel like a person dealing with drug withdrawals “I gots to get some more of that show” and as unrealistic as it could be I think there could be a sixth season if the execs would give it a shot. but I would be happy with a movie .

One of the greatest shows on t.v I thank Netflix for opening my eyes to this show. Sad that it has come to a conclusion.btw who gets chills when “devil town “starts playing. Watching the season all Over when football starts

Please make a season 6. I absolutely love this show and never want it to end. I just finished watching season 5. There has to be more.

Same here, about to watch the last 2 episodes of season 5… and then what? ? ?

I recently watched John Carter and realized that was Tim riggins I really live this show it had so many different out looks and ways of life for a younger crowd now we have the shows Like teen mom and it shows negative things on society this show really is amazing I watched it on netflixbut I’m buying them on CD also. IS THERE ANY CHANCE THEY WILL HAVE A SEASON 6 PLEASE LET THERE BE!!

you need a 6th season season 5 ended like there was more to know about everybody. it leaves you hanging with too many questions

I really loved watching this series. I am only a 13 year old boy but I loved it with the first season as jason street getting paralyzed then lyla and tims affair.then in the second season with smash and saracens rivalry to tyra and landrys murder wrap. In the third season where its up to riggins and saracen then jd mccoy. My personal favorite season would have to be the second beacuse of how they portray riggins as the lost boy and how he takes refuge in a meth house. I just want to see a sixth season. Next season… Read more »

I absolutely love this show. i only started watching last wk when buying season one and two. then couldnt resist bought 3. ilwish it got picked up for.season six……. i was not ready for it to end and there were so mamy more possiblities for storylines.

I watch this show on paid TV in Indonesia and I enjoy it. Its well written and is played by a high quality cast. I hope the producers re-consider their decision. Many write here about how great the stories are, or how its a show that the entire family can watch…I agree with all that, but I think the show adds another dimension (especially for viewers outside the US; non-Americans). Its an education and depiction of American values through sports. The struggles and challenges of everyday American families..it provides us (outside of the US), a glimpse of America’s “big hearts”,… Read more »