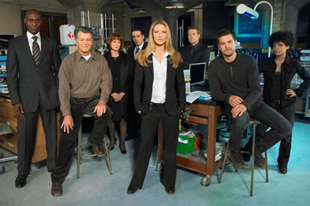 TV show description:
This sci-fi drama, created by J.J. Abrams (Lost, Alias, Felicity), begins at Logan Airport in Boston. Flight 627 from Hamburg, Germany, has just arrived after having flown through an electrical storm. When FBI Special Agent Olivia Dunham (Anna Torv) and her partner John Smith (Mark Valley) are summoned to the airport, co-worker Charlie Francis (Kirk Acevedo) informs them that the flight has landed via autopilot. Everyone onboard is dead and their organs seem to have melted.

Homeland Security Chief Phillip Broyles (Lance Reddick) immediately suspects terrorism and wants Olivia and John to investigate two Middleastern men who’d been seen at the airport handing a Caucasian man a suitcase. While investigating a storage facility, an explosion occurs, sending John to the hospital with symptoms similar to those from flight 627. Olivia researches John’s condition in order save him and recovers the name of a former government researcher of fringe science, Dr. Walter Bishop (John Noble).

Dr. Bishop’s been institutionalized for the past 17 years after an experiment in his lab caused a lab assistant’s death. With the help of his estranged son, Peter (Joshua Jackson), she recruits Dr. Bishop to help her solve the current flesh eating phenomenon. Their examination into the epidemic leads them to Massive Dynamic, a multi-billion dollar corporation. The mysterious Nina Sharp (Blair Brown) is the executive director of the company’s fringe division and stonewalls outside inquiries.

Under the auspices of Broyles, Olivia, Dr. Bishop, Peter, and lab assistant Astrid Farnsworth (Jasika Nicole) soon discover that what happened on a runway at Logan Airport is part of a much bigger mystery. While trying to piece together what is going on, the team encounters additional strange occurrences like genetic mutations, rapid aging, levitation, reanimation, and telepathy.

Should have not been cancelled. Get a good show, that has great drama with high intelligence, and it gets thrown away with something ~dumbed down~to take its place……ugh!

I want Fringe back it shouldn’t of been cancelled.

i loved this show. the characters were great, the special effects were wonderful and it was quality programming. It shouldn’t have been cancelled.

First time I’m addicted to such a good show !!! I’m surprised it was cancelled ? Such a disappointment , first show that puts my mind to think ! Quality show compared to these so called “shows we have now “

This show should have NEVER been canceled. They leave on some crazy comedy that isn’t really funny. Then take off a show that is really good, and could have lasted as long as “Lost” or maybe longer. Please bring it back with the original cast, including Nina Sharp. Now the Observers are gone. I would love it if you would.

Bring this show back it deserves it it didn’t get that many views but it was one on the last great sci-if shows.

Just started watching Fringe on Netflix and now I’m hooked. Why did they cancel this? They need to bring it back! I am not into all these reality shows. I love this show…puts my imagination to work. Love Walter Bishop!!! Please bring back Fringe!!!!

I just started watching fringe about 2 weeks ago. I went through all 5 seasons. I love it….couldn’t wait each day to see the next few episodes. This show needs to come back. Loved it

I agree with all the comments regarding how good this series was & how much it’s being missed. Maybe they could make the occasional film like they have been doing with X-Files.

Another tragic loss. I watch shows like Fringe not because they are popular, but because viewers like me enjoy escaping the reality of life sometimes. I just wish the networks would pay more attention to our likes and dislikes.. Miss the show tons gratefull for Netflix for including Fringe in their collection.

Bring back my favorite show.

THE NETWORKS LEAVE ON BACHORLETT AND OTHER CRAP LIKE ISLAND EXPERIENCE WITH STUPID FAKE PEOPLE AND ENDLESS SPEAK ABOUT HOW STRONG AND VIRLE AND STUPID STUNTS. SHOWS LIKE FRINGE THAT WAS A LITTLE MIND BENDING A LITTLE ODD TOOK YOU OUT OF EVERYDAY GRIND FOR AN HOUR. SOME OF THE COMEDY SHOWS WITH ENDLESS SEXUAL REMARKS AND THE APPEARENCE OF REAL LIFE IS MIND EATING BRAIN CELLS. WHAT A SHAME THIS SHOW HAD TO GO. SHAME ON YOU

i miss fringe bring it back

love fringe Bring it back please and yes it should have lasted longer ive been sitting here wondering where it went and waiting for it to come back sooooo Sad!