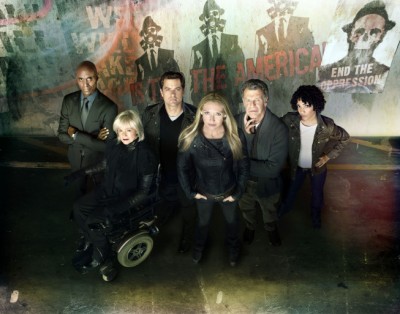 FOX has announced that the last two episodes of Fringe, their low-rated sci-fi series, on Friday, January 18th. The network ordered a fifth and final season of 13 episodes last spring.

THE FIFTH AND FINAL SEASON OF “FRINGE” CONCLUDES WITH A TWO-HOUR SERIES FINALE, INCLUDING THE 100TH EPISODE, FRIDAY, JANUARY 18, ON FOX

As the Fringe team fights for humanity’s future in the fifth and final season, the imaginative journey toward the end of the acclaimed series will culminate in a climactic conclusion during the two-hour final-two-episodes event Friday, Jan. 18 (8:00-10:00 PM ET/PT) on FOX. This milestone date will also celebrate the series’ 100th episode.

Series Co-Creator and Executive Producer J.J. Abrams reflected on the show’s run: “It has been an absolute honor to have been a part of the weird and wonderful world of FRINGE. I will always owe the cast and crew for pouring their hearts and souls into every dimension of this series. Creating the show with Bob Orci and Alex Kurtzman was a joy, but watching it evolve over the years into such an imaginative, insane and heartbreaking ride is nothing less than a thrill. I am grateful to our blessed fans, and to Kevin Reilly and Peter Rice and everyone at the glorious Fox network for allowing FRINGE to reach its bittersweet conclusion.”

Executive producer and showrunner J. H. Wyman said, “Above all else, from the bottom of my heart, I would like to personally thank everyone involved with FRINGE. From the most amazing fans, to our incredible cast, writers and crew, and our wonderful partners at FOX and Warner Bros. – we would not be here without you. It simply cannot be overstated how grateful I am for the ongoing and unconditional support we have received over the past five seasons. It has been both mind-blowing and humbling. I’ve always been a fan of science fiction, and to be able to tell this story about a family – a family that, through everything, fought together for survival – has been a highlight of my career. As we approach the final chapter, I can hardly believe it, and I’m just truly thankful for this unparalleled experience.”

“FRINGE has truly imagined the impossibilities over its five seasons and will go down in the books as one of FOX’s most riveting and creatively brilliant series,” said Kevin Reilly, Chairman of Entertainment, Fox Broadcasting Company. “It has been a blast to work with J.J., Joel and their masterful creative teams, as well as with Anna, Josh and John and the rest of the most talented cast and crew in the business.”

The fifth and final flash-forward season of FRINGE is set in 2036, when the “Observers” have become ruthless rulers of a dystopian society. As the battle for the world’s future continues to unfold, the Fringe team is in the midst of making its final stand to save humanity. In the aftermath of the devastating loss of Peter and Olivia’s daughter, ETTA (guest star Georgina Haig), the intensity escalates as the combat continues and Peter makes a pivotal and game-changing move in the all-new “An Origin Story” episode airing tonight (9:00-10:00 PM ET/PT) on FOX.

Created by J.J. Abrams, Alex Kurtzman and Roberto Orci, FRINGE is produced by Bad Robot Productions in association with Warner Bros. Television. Abrams, Bryan Burk and J.H. Wyman serve as executive producers, while Akiva Goldsman is a consulting producer. “Like” FRINGE on Facebook at www.facebook.com/Fringe. Follow the series on Twitter @FRINGEonFOX and join the discussion at #fringe.

c926Awesome episode. This is an exelneclt show. I wish I jumped on board sooner. I’ve got a lot to say so I’ll keep it brief.I did like that they resolved my biggest complaint about the S2 finale, which was that it made the other world feel like a bad and evil place as opposed to another world fighting for it’s own survival. Introducing the Taxi Driver for the episode, having Charlie and Lincoln go to help who they think is thier friend. Those little things added up. It still hasn’t rid the vibe that they are the villains but they’ll… Read more »

Thanks for a great show! I’ll miss Fringe greatly.