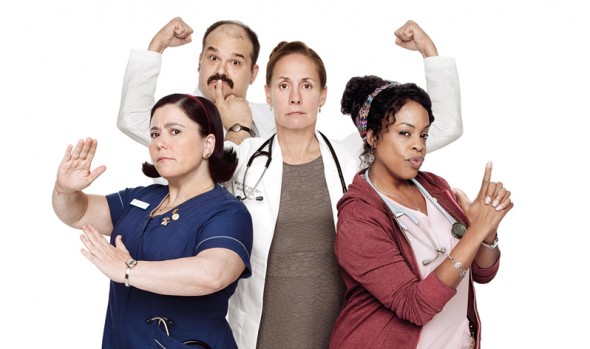 Looks like Laurie Metcalf may soon have some extra time on her hands. The actress’ CBS show, The McCarthys, has been essentially cancelled. Now, her Getting On series has been renewed for a third but final season on HBO.

Based on a UK series of the same name, Getting On follows the staff at the Billy Barnes Extended Care Unit of Mt. Palms Hospital in Long Beach, CA. They attend to the needs of female patients who are often “getting on” in years. The comedy stars Metcalf, Alex Borstein, Niecy Nash, and Mel Rodriguez.

The series has been renewed for a third season of six episodes — the same quantity as the first two seasons. Season two of Getting On attracted just 250,000 viewers and a 0.08 rating in the 18-49 demographic but the cable channel has been able to justify keeping it on the air by keeping costs low.

No word yet on when the final season will begin airing.

What do you think? Do you like the Getting On TV show? Do you ythink it should end? Should there be a fourth season?

I feel this should be considered a sleeper series & as yet to be discovered. It is in a time slot that has a lot of competition as well. The writing, acting & dry humor is superb & anyone who has experience working/dealing with patients in such an environment can fully appreciate the situation, work politics & personalities shown on the series. This series needs more exposure.

I love this show both the English and the Americans, don’t cancel it the acting is great and it is very funny ,we all need to laugh more often, or at lest play the reruns.

When will the third season of Getting ON be aired in Canada. I really hope that more seasons will air as well. The best show ever on t.v..

I’m 25, entering the healthcare field and i instantly fell in love with this show
6 eps a season is not enough!
esp if this is the last season

Just read viewers comments and they are all on the money. This show provides real life situations. Something we can all relate to and each character carries their role so well together that it makes it refreshing to watch. I rank this show in the top category of such other fine shows as “silicone Valley”, “Devious Maids”, “Desperate Housewives” that was cancelled and such oldies as “Seinfeld”, “The Nanny” and “all in the Family”. Why not cancel the ridicules reality shows I.e. “Housewives of….” And all the other gory, stupid love triangle stories and violent shows that create so much… Read more »

Love the show. Should not be cancelled. It’s one of the few shows that I watch. With the aging of the baby boomers, it really hits home.

This is a great series, funny and relevant. Please keep it on. And I agree, six episodes for one season Doran’ t give it a chance to let viewers get drawn in.

This show is so funny, imagine… no sex, drugs, and frantic car chase scenes?? I love it ,the cast is fantastic, I love each of them, right down to the cranky old patients.

Rarely do I like a remake from the UK better than the orginal. This cast is excellent.
I like this show.

This is an amazing series! I hate to see it cancelled. This show is wonderfully cast and such a different breath of air in the most of ridiculous hipster dramas, mystery and trending trash. HBO give the small mass of people that actually enjoy good TV some thing to watch.

Love love love the $how .. I am a nurse and literally am in hysterics every episode. I can so relate with some of the antics of the patients on the show. They r right on que .. their behavior their rebellion their noncompliant tendencies and the frustrations of the nurses trying to live in the reality of our messed up Healthcare system and all the red tape and unreasonable demands put on them and still provide due diligent care and service. It almost mimics real life .. just a bit of an extreme and exaggerated version; the comic relief… Read more »

Why couldn’t they have given this show more then a six episode run per season?
It shows no faith or trust in a series.
People need more to catch on to something.
This was a fantastic show that could have developed into something very special.

Another great cast shot down the tubes.

Let’s hope for a Netflix or Amazon pickup or save.

This is a great show.
please keep it on.

What’s with all these cancellations on these shows all of a sudden? Good shows I might add. Bring back Red Band Society and Utopia these are two really good shows. The ones that are being left on there are crappy with the exception of Survivor, The Amazing Race, Big Brother, American Idol, Hells Kitchen, Motel Hell, Ramsey’s Kitchen Nightmares, Master Chef and Master Chef JR, The Taste, The Voice, etc. These shows are also good. Leave all the good shows on and take the bad ones that are still on off!

You are right that there are some show that should have been left on and others cancelled. All the show you list deserve to be cancelled because they are crap TV. It amazes me how all those “reality” type shows stay on TV and never change and never offer anything new to viewers. Rinse and repeat TV is what you like.

It’s going to be a really rough year for Laurie Metcalf if The McCarthys gets canceled soon by CBS. 🙁