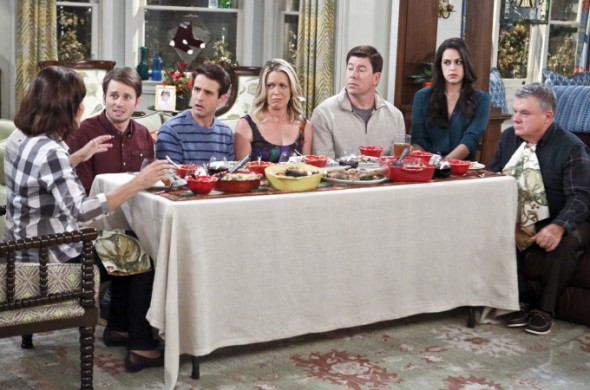 CBS hasn’t cancelled The McCarthys but fans aren’t going to be able to find any new episodes on the schedule.

The sitcom debuted in late October and, despite mediocre ratings, the network has kept The McCarthys on the air. It’s the lowest-rated scripted series on the network in total viewership and also has the lowest demo rating of any CBS sitcom this season — including The Millers which was dropped mid-way through its second season.

The network didn’t give the show a full season but did order two additional installments, bringing the first season’s tally to 15 episodes. It remains to be seen if we will actually see all of them however.

CBS has aired 11 of the 15 episodes so far. They had been set to air two more installments, on February 5th and 12th. Now, the network has pulled them and plans to air reruns of The Big Bang Theory instead.

The following week, CBS will fill the 9:30pm timeslot with part of the Two and a Half Men series finale and after that Mom will shift there — to make room for the debut of the new version of The Odd Couple at 8:30pm.

The network hasn’t announced any plans to air the remaining four episodes of The McCarthys. Also, based on the ratings, it looks very unlikely that the series will be renewed for a second season.

What do you think? Do you like The McCarthys TV show on CBS? Would you watch the four remaining episodes? If you ran the network would you renew the sitcom for a second season?

I loved the Mcarthys along with lots of people ,the Big Bang theory is a good show although it comes on tv enough .why can’t you play the show earlier in the day ,so we can watch it then ?? Please CBS bring it back

I just found out show was cancelled. I am really shocked as I thought it was one of the top 5 comedies for 2014 and 2015. I am a conservative senior retired person. Great comedy. Please air the final 4 episodes.

Bring the McCarthys back!

Please bring The Mccarthys back. This show is hysterical

Love the jokes and talent….quite funny! Let it continue on tv…just put it in a better time slot. Love this show!