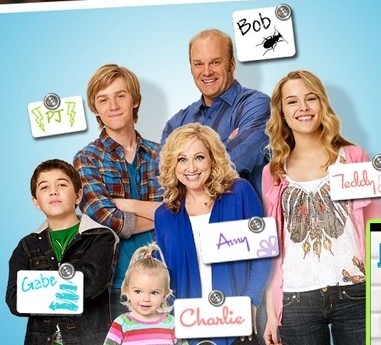 The stories of the Duncan clan will continue. Disney Channel has announced that they’ve renewed their popular Good Luck Charlie TV show for a fourth season.

It’s unclear how many episodes have been ordered for season four (or four season three, for that matter) but seasons one and two had 26 and 30 installments, respectively. Nine episodes of season three have aired so far.

Here’s the Disney press release with some additional details:

A fourth season has been ordered for Disney Channel’s “Good Luck Charlie,” a hugely popular family sitcom that recently delivered the #1 cable telecast of the week (8.9 million, L+7 data) and the #1 telecast of the entire second quarter 2012 among Kids 6-11 (4 million, L+7 data) and Tweens (3.7 million, L+7 data). The announcement was made today by Adam Bonnett, Senior Vice President, Original Programming, Disney Channels Worldwide. The series presents authentic, kid-relatable stories told from the young characters’ POV yet more nuanced towards the family. The third season storyline recently introduced a newborn baby into the Duncan household.

“The success of ‘Good Luck Charlie’ is a testament to the strong comedic writing of the inventive creative team and characters so artfully brought to life by the talented cast. Every kid wants to be part of the Duncan family, and we look forward to telling more stories that engage and entertain viewers in a fresh and relevant way,” said Bonnett.

In season four, Toby grows into a toddler and Charlie embarks on new play dates, while the entire Duncan household gets busier and is filled with entertaining milestones and daily amusements. Amy’s role as a full-time mommy blogger propels her to celebrity status; Bob has a career mid-life crisis and begins contemplating his next move; PJ develops a passion for the culinary arts; Gabe forms a special friendship with a girl; and, with college fast approaching, Teddy and Spencer evaluate their relationship.

What do you think? Do you or someone you know like Good Luck Charlie? Why do you think that it’s so popular?

Make a season 5 🙁 i dont want it to stopppppp!

Why would they take something from us so important. I felt like I was part of the Duncan family. Why? (Cry-Cry)

+Charlette:Disney has a stupid 4 season rule they keep shows on Disney channel from continuing past 4 seasons unless a spin off series involved.

It’s the best current show on Disney Channel. All of the other ones are terrible and I cant stand them.

This show is terrible, it’s gives kids bad messages, like its ok to get back together with a cheater and that you should like someone for their looks and how popular they are and that nerds are losers. Teddy is an idiot but applies to Harvard and wants to be a cheerleader, I want her to fail so much, that’s how much I hate her character. I wonder who Bridgit Mendler is related to to have the show running for this long, everything she’s in except for wizards of Waverley place, she ruins. Everybody I know is theoroughly offended by… Read more »

That is very harsh

+Charlette:Don’t listen to Anne she clearly got the message mixed up because the message when teddy got back with spencer was not get back with a cheater it was teaching kids how to forgive someone when they are sorry for hurting you even if they do something bad like cheat on you.everyone deserves a chance.

+Charlette:Don’t listen to Anne she clearly got the message of teddy and spencer getting back together wrong.

+Anne:you and everyone else clearly do not know a good family friendly show when you see one. Plus spencer regretted cheating on Teddy she was originally hesitate to get back together with him until he apologized good luck Charlie has good messages not bad ones so get a life.

+Anne:and FYI when teddy got back with spencer the message was not get back with a cheater it was forgive someone when they are extremely sorry for hurting your feelings.

+Anne:Uh the message when teddy got back together with spencer was not get back with a cheater it was teaching kids how to forgive someone when they are sorry for hurting you. Spencer made a mistake that he regretted so teddy had a right to forgive him and get back with him he regretted his decision to cheat on her.

It is appropriate time to make some plans for the future and it is time to be happy. I have read this post and if I could I desire to suggest you few interesting things or tips. Maybe you are able to write next articles referring to this post. I want to read more things about it!

I like the Good Luck Charlie show . I wish Leigh Allyn-Baker and her family Best Wishes on her third baby due to be born in 2013.

i hope good luck charlie lives forever.i am 70yrs old and think this show is the best because in is clean and holesome.

i think good luck charie is a amazing I think Charie should grow up and when she does Amy to have another baby and she make a video and say Good luck1!

I can’t wait for it to air,it probabley will in 2013.I love this show its my favourite and I love seeing Charlie grow older as the series go by.I hope that in the middle of Season 4 a fifth season is announced although it is a little early to be talking about that.

Good Luck Charlie is the best show out there. But the fourth season is the time to end it. The series has became popular and could go on forever. But this could become bad and the show will lose ratings. They should end when it is popular and the finale will have everyone talking. The finale should be called Goodbye Charlie. It should be about Teddy deciding to stay home and help out mom or go to college. Meanwhile,Spencer and Teddy start to grow apart. Meanwhile, PJ gets in a fight with the family and starts to not talk to… Read more »

I watch this show with my great granddaughter, I love this show. One of the most entertaining in a long time., very well written , the actors are so funny perfect for their roles. I hope they do not take this sitcom off. My 16 year old cheer leader grand daughter still watches this from time to time and my 49 year old daughter is hooked on this show . It’s just great so many people love it.

YoI love your you gise.

Went are you dow.