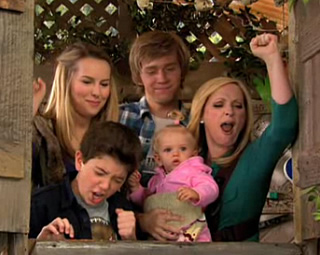 The Disney Channel’s new hit series, Good Luck Charlie, has been picked up for a second season while season one of the TV show is still airing. In addition to the next season plans, pre-production has already begun on a holiday movie.

Good Luck Charlie centers around the Duncan family as they adjust to the surprise birth of their fourth child, Charlotte, who’s been nicknamed “Charlie.” When the parents return to work, they ask their three other kids to pitch in and help raise their little sister. The cast includes Bridgit Mendler, Jason Dolley, Bradley Steven Perry, Leigh-Allyn Baker, Mia Talerico, and Eric Allan Kramer.

The comedy series is executive-produced by television veterans Dan Staley (“Cheers,” “Love & Money”), Phil Baker and Drew Vaupen (“Suddenly Susan” and “What I Like About You”). Baker and Vaupen are also the series creators.

In 2Q10, “Good Luck Charlie” ranked as the No. 1 series on television among Kids 6-11 and Tweens 9-14, posting double-digit gains year to year among both demographics and defeating its time period competition by triple digits (Source: Nielsen Media Research, Most Current U.S. national ratings, 2Q10: 3/2910-6/27/10; premiere to date=4/4/10-6/27/10. Ranks based on 000s, then rating, unless otherwise noted. Series ranks based on trackage level data with minimum 3 telecasts).

In the series, the Duncans’ lives are turned topsy turvy with the arrival of a new baby sister, Charlotte (AKA Charlie). When parents Bob and Amy return to work, they enlist the help of their two teenagers, Teddy and PJ, and 10-year-old son Gabe to care for Charlie. Now the older siblings have to pitch in and get familiar with all things baby while navigating typical teen lives. Each episode features Teddy’s video diary, one she’s creating for Charlie to use for advice after Teddy has grown up and moved out.

“Good Luck Charlie” is seen Sundays at 8:30 p.m., ET/PT. It is seen on Disney Channels around the world, with full episodes available on DisneyChannel.com, Disney Channel on Demand, mobile providers including Sprint TV, MobiTV, AT&T CV and Verizon V Cast, iTunes, Netflix and onboard airlines.

“Good Luck Charlie” is a production of It’s a Laugh Productions, Inc. It carries a TV-G parental guideline.

What do you think? Do you watch Good Luck Charlie? Are you glad to hear that it’ll be back for another season?

Rich in linoleic acid, vitamin E and many other essential fatty oils, it is
especially effective for the repairing skin around
the eyes and is known to visibly reduce the appearance of fine lines and wrinkles.
There is no better way of making this happen than doing it naturally.
Sugar cane is used too, and these are the cleanest oils to use.

Charile and The arte Movies

omg charlie is one cute and adorable little girl ….. good luck in your new baby bro / sis she is gettting so big 😀

Love you
Reply to  someone

Love absolutely love this show watch it mostly everyday iv watched it so much that my mom is starting to like it !
Teddy is my Idol love you Bridgit Mendler<3

[…] when they’ll start airing but the past two seasons have kicked off in April and February. Season two continues to air on Sunday […]

As I said, Good Luck Charlie is the best show on television. Oh, and I really love the fact that Charlie a.k.a. Charlotte, shares my name!

My teen daughter got me watching good luck charlie and I am hooked! I consider it the best show on television! Love the frolics, the show is hilarious, good, clean, fun!

my 2 yr old daughter loves this show and i dont mind watching it either!! i also have a 5yr old and 7 yr old sons that like this show. hoping it comes out on dvd soon!!