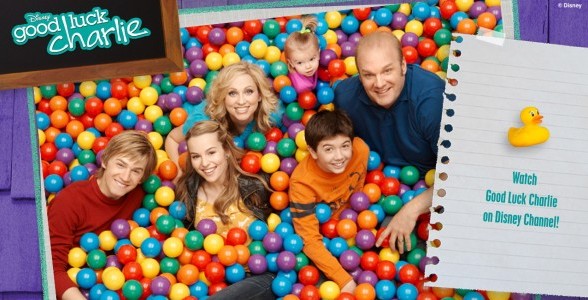 Disney has announced that their popular comedy Good Luck, Charlie will end after 100 episodes and four seasons on the air. Production on the show will end soon but the final episodes won’t be shown until next year.

Disney Channel has a track record for pulling the plug on its popular shows after 100 episodes. Though the show is ending, Good Luck, Charlie will likely be rerun on the cable channel for many years.

A representative for Disney Channel said, “On behalf of everyone at Disney Channel, it’s been our great pleasure to work with the extraordinary producers Phil Baker, Drew Vaupen and Dan Staley and the writers and crew of Good Luck Charlie… We could not have dreamt of a better cast than Bridgit Mendler, Jason Dolley, Leigh-Allyn Baker, Bradley Steven Perry, Mia Talerico and Eric Allan Kramer (and even little Logan Moreau as Baby Toby!) and the many guest stars who make the series so special.”

What do you think? Are you sorry that Good Luck, Charlie is ending? Do you think it should continue or that it should have been cancelled awhile ago?

Please bring back Good Luck Charlie. My 2 year old daughter and I love to watch this show together and my little one has picked up so many great new things by just watching charlie. We love the family lessons this show has taught us please bring back charlie and the family for more seasons my little one would love this and so would her mommy along with coutless other parents and fans who feel the same way. Listen to your fans Disney!

Ahh well, at least there should be season 6 to season 8 as we love this show so much. Please come back for your fans. Bring this show back.

Please make more seasons of good luck Charlie. For the first time I cried because I love the show so much. I read a lot of the posts and there are a lot that say to make more seasons. So make more to make people happy. When the show was over I felt like my heart was broken I couldn’t even watch tv any more and you know how people like tv.

I honestly think that good luck charlie should make atleast 6 seaons and put them all on netflix….since teddy went to collage i dont think that it will be any more seasons but i hope they do make a seaons 5 even if teddy is in it or not…..they should have a seaons 5 so charlie will be older and atleats toby would be the age charlie is now…..

Best show ever please bring it. Back im a. Kid and i love good luck charlie please

I really like watching Good Luck Charlie. I think they should make a 5th season and keep going on. So many people love that show. I have watched all 4 seasons and I think it should keep going because at the very last episode it has them moving in a new home. They should continue and show them in there new home, and also show when Charlie an Toby get older. Keep it going!!!

For the first time I actually cried for a show. this show was like a part of me and it breaks my heart to see it gone. If there’s anything y’all could do to bring back Good Luck Charlie, I’ll be glad if you do. please I want more seasons. this show brings me joy.

I know Julia if they end that show I will be mad with tears in my eyes that show help me grow up THEY SHOULD NEVER QUIT GOOD LUCK CHARLIE It is a good SHOW! IT, should be ended in a billion of years. DO NOT END THAT SHOW

hello! i think good luck charlie should have NEVER gone!! please make a season 5, it would bring hearts back to many people #LOVE THAT SHOW!!

Best show on Disney should have never been canceled. Bring back good luck Charlie

That is right i feel like my heart just broke

I love that Show start it back please