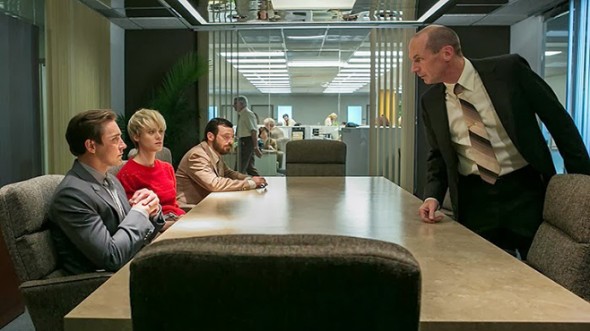 TV show description:
This fictional drama takes place in the early 1980s, roughly one year after IBM cornered the computer market with the release of its first major product. The title refers to the term for computer machine code instructions that cause a computer’s CPU to cease meaningful operation.

A hard-driving former IBM sales executive, Joe MacMillan (Lee Pace) oozes charisma. He shows up at Cardiff Electric and essentially bulldozes his way into a senior position on the sales team. Once he has the job, he orchestrates a plan to reverse-engineer the flagship product of his former employer and build something better.

A once-promising engineer, Gordon Clark (Scoot McNairy) is sleepwalking through his life until the day Joe approaches him with his plan. Gordon longs for a redo of his past following the humiliating (and very public) failure of Symphonic, a computer he created with his wife which failed to turn on at the computer industry trade show COMDEX. After that traumatizing experience, Gordon reluctantly moved his family to his wife’s hometown of Dallas and took a job at Cardiff that’s far below his abilities.

Gordon’s wife is Donna (Kerry Bishé). Her parents are entrepreneurs who founded a high-end gadget company (à la Sharper Image) called Razor’s Edge. An accomplished musician, she found her calling in computers while attending the University of California, Berkeley, with Gordon. Though she’s resigned to her husband’s being mentally absent following the Symphonic failure, she fears that the new Cardiff project will result in the end of her marriage.

A volatile prodigy who puts her future in jeopardy by dropping out of college to join the rogue PC project, Cameron Howe (Mackenzie Davis) is a shock to the system of conservative, old-guard Cardiff Electric. At 22 years old, she represents what is next in the world of computing and a slap in the face to the traditionally male-dominated 1980s tech industry. The product of a tumultuous childhood, she sleeps at the office, takes stuff from others’ desks, blasts punk music, sleeps with her boss Joe, and butts heads with Gordon.

John Bosworth (Toby Huss) is a dyed-in-the-wool Texan and old-school businessman who has spent the past 22 years building Cardiff Electric into a regional power. As senior VP, he runs the company’s day-to-day operations and finances for founder emeritus Nathan Cardiff. After Joe forces the company into the PC race, Bosworth keeps a wary eye on the interloper who will either make Cardiff into a tech powerhouse or a national laughingstock.

What do you think? Do you like the Halt and Catch Fire TV series? Do you think it should have ended or been renewed for a fifth season?

To the producers & AMC honchos: Guys – for once do the proper thing & heed your audience. See other comments & read their comments. No, just go ahead & send HaCF the way of Rubicon, Longmire & Low Winter Sun. All of these I ‘stumbled’ upon – not much advertising, if any, did I see. Please give us another ‘reality’ show. That way I have more time to do crosswords, read a book or scour maps looking for lesser known hiking trails or some good white water rafting. One last thought – why do you keep trying with new… Read more »

I and my whole family have been waiting over a year for this show to return. PLEASE bring it back! The whole production is excellent and made to feel timely with history of computer technology that is fascinating. At least provide all who enjoy an intelligent show a third season with a finale.

I was surprised to hear they were going to give it the ax…I can understand when ratings are low, but why not do a talking fire show…that might help get the ratings up, I have to say i really enjoy this show and yes I want more, more characters, more on the edge of my seat can’t wait for the next episode because I can’t believe you ended the episode there story. More ego, more machismo and more ” i am women hear me roar” story. I am glad that like others have said that this show is not your… Read more »

This is a great show!!! I was shocked when I heard it was being cancelled. Starring the incredible Lee Pace! Are they mental ????? So glad they came to their senses. Can’t wait for it to start again. I’ll even watch the commercials & buy their crappy products to keep it on the air.

I really like this show a lot! Create characters!

My wife and I got hooked on the show after watching it to see me as an extra in the boardroom scene. While waiting and watching we got hooked. It sort of dragged at the beginning, but became more interesting as we went along.

Love this show. Smart, funny, sexy, attitude, great character development, great acting and story line. Finally something other than a reality junk, cop, lawyer or medical storyline. What else do people want?? Please keep this show for people who have still like to use their brains!!!

I love this show! The characters have really grown during the season. I look forward to it each week. RENEW!!

Love this show It is starting to really come together. We know the characters and what drives them in the emerging PC world RENEW I want more

It’s kinda boring, wish they would focus more on computer history instead of the soap opera style television, it hasn’t held my interest and now a-little disappointed. I believe there is a lot more interest in this erra of the 80’s and the whole formation of computing technology and I’m afraid it’s now been spoiled somewhat. Sorry just disappointed 🙁

I love this show. Every episode gets closer to the thing that gets us to the thing. Everyone’s growing into their personalities. I love the 1980’s. I really want to see this show renewed. So many shows really suck now, I find myself waiting for the next scene or episode with such excitement.

Great show! Worrisone that there are those that have no interest in these types of shows. I will contiune ot watch. Am afraid it’ll have the same fate as Rubicon and it was a fantastic show.

DVR’d and watched a few minutes; I’d say it WILL CONTINUE considering what AMC and other networks are doing…running 8-13 episodes THEN deciding what to do. I DOUBT this is a new _Walking Dead_ as far as popularity but expect it to survive. I NEED to finish episode 1 and have set a Season Pass with TiVo to get them all

We watched, we liked. it’s fast paced, but I realize most pilots are like that, trying to bring the whole idea of the program together. But my wife and I both liked it. of course all that means is, it will be cancelled within 5 episodes. that’s the way it goes for us!

riggarob. seems the same happens to us. Every time a 1/2 decently good or smart show comes on that we like, it get cancels. Maybe I should watch bad shows so they get cancelled!!

I know, but I just can’t bring myself to do it!