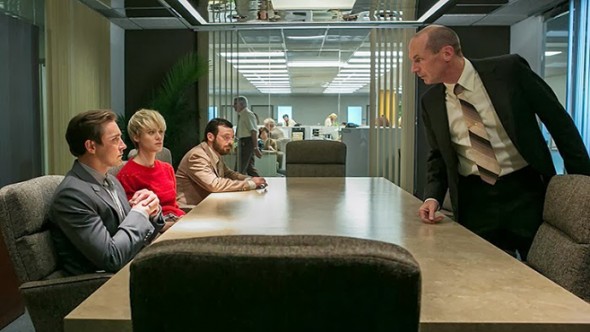 AMC has announced that the second season of Halt and Catch Fire will debut on Sunday, May 31st.

New York – March 26, 2015 – AMC announced today the season two premiere of “Halt and Catch Fire” on Sunday, May 31 at 10:00 p.m. ET/PT. The series, which stars Lee Pace, Scoot McNairy, Mackenzie Davis and Kerry Bishé, will pick up in early 1985 and center on the rise of Mutiny, Cameron (Davis) and Donna’s (Bishé) start-up company that is built upon the most disruptive idea of the modern era – the Internet. At the same time, Joe (Pace), Gordon (McNairy) and Bosworth (Toby Huss) will be caught up in their own “online” wave, remaking the tech landscape all around them, as they attempt to heal old wounds and deal with the fallout of season one. “Halt and Catch Fire’s” second season will explore themes that tap directly into the modern zeitgeist such as the thin line separating genius from self-delusion, the fragility of human connection, and everyone’s desire, especially in today’s tech-obsessed world, to leave a meaningful mark and do something that truly matters.

“To our passionate core audience and the critics who loved the show through Season One – we thank you sincerely for your support. Season Two won’t disappoint. We’re going to drill down even deeper into these characters we’ve created, to give you all the emotional and psychological depth you’ve come to expect from ‘Halt and Catch Fire,’ while at the same time evolving the show to be brasher and even more addictive,” said Jonathan Lisco, showrunner and executive producer of the series.

AMC also released today a sneak peek clip from the season two premiere episode featuring a first look at Mutiny. The clip showcases Donna (Bishé) as she weaves through the bustling start-up office which is wired with creativity and invention. The sneak peek can be viewed here.

The complete first season of “Halt and Catch Fire” is available now through Tuesday, April 7 on AMC On Demand and AMC.com. Viewers will also be able to catch up on season one on Netflix beginning Wednesday, April 8.

Whether commemorating favorite films from every genre and decade, or creating acclaimed original programming, AMC brings to its audience something deeper, something richer, Something More. The network reigns as the only cable network in history ever to win the Emmy(R) Award for Outstanding Drama Series four years in a row with “Mad Men,” and six of the last seven with current back-to-back honoree, “Breaking Bad.” The network boasts the most-watched drama series in basic cable history and the number one show on television among adults 18-49 for the last two years with “The Walking Dead.” AMC’s original drama series include “Mad Men,” “The Walking Dead,” “Better Call Saul,” “Hell on Wheels,” “TURN: Washington’s Spies,” “Halt and Catch Fire,” and the forthcoming “Humans,” “The Making of The Mob: New York,” “Into the Badlands” and “The Night Manager.” AMC also explores authentic worlds and discussion with original shows like “Talking Dead” and “Comic Book Men.” AMC is owned and operated by AMC Networks Inc. and its sister networks include IFC, SundanceTV, BBC America and WE tv. AMC is available across all platforms, including on-air, online, on demand and mobile. AMC: Something More.

What do you think? Are you a fan of this series? Do you plan on watching the second season?