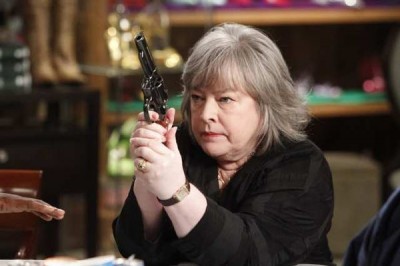 When asked why Kathy Bates and company had been let go, NBC chairman Bob Greenblatt said, “It was a difficult decision. Everyone here respects Harry’s Law a lot but we were finding it hard to grow the audience for it. Its audience skewed very old. It’s hard to monetize that.”

Bates broke the news of the show’s cancellation over the weekend. She wrote to fans, “Sad news today. Harry’s Law will not be renewed for a 3rd season. We are all terribly sad. Many thanks for all your support.”

The actress later noted, “Waiting for this verdict was tough. We wrapped a month ago so it was a very long wait!”

Bates reconciled, “Tough day getting used to the idea of no more Harry. Think I’ll keep her with me 4ever.”

When asked if there was a possibility that Harry’s Law might move to cable, Bates responded, “No hope.” But, responding to an inquiry last night on the subject, Bates wrote, “Not sure, but don’t think so.”

Justine Lupe, who played Phoebe Blake, wrote, “Sad day. Little bit of heartbreak. What a gift to had had this time.”

Actress Karen Olivo, who joined the cast in season two as Cassie Reynolds, responded with a message to her castmates, “It was an honor, my friends!”

Nathan Corddry, who’d been playing Adam Branch since the show began, noted, “I’d thank everyone individually, but the list is too long.Never was happier professionally. Thank you for a wondrful 2 years. #tough2swallow”

What do you think? Are you going to miss Harry’s Law as much as the cast will? If the show did move to another channel, would you follow it?

NBC had few good shows. In fact Harry’s Law was the best! We never missed an episode. Now NBC will put some STUPID IMMATURE show in place that we will NOT watch! The NBC Network sucks as it is, they need to listen to THE PEOPLE!!!

Very disappointed that Harry’s Law was cancelled by NBC! I really hope another station picks it up!

Harrys Law is one of the best shows Ive seen lately. Katy Bates is awesome as Harry. Why on earth would you drop the series……WOW…you cancel good ones…and keep bad ones..I dont get it……this flat sucks..>!!!! Come on……get your heads out of where the sun dont shine…..

Thought Harry and Prime suspect were 2 of the best shows on NBC. Sorry, but I’m
past 50! I hope they show up somewhere else..

Harrys Law being cancelled sucks. It is one of the best shows on TV. Crazyness at NBC. From this point on I will not watch NBC. I’m done

Loved, loved, that show. I hope cable picks it up. Kathy Bates is a fav actor of mine. My husband and I will really miss it next year.

I would follow this show anywhere! NBC should be ashamed for cancelling such an excellant program. I can’t remember when I’ve enjoyed a show this much.

We loved Harry’s law. So did my son ,my niece and my nephew!it was funny, modern and brought important issues to the public. We would follow it to any channel. NBC has such bad judgment, that’s why they always rank at the bottom. People over 49 spend lots of money. Wake up NBC!!!! Soon I won’t watch even Nightly News !

I would follow Harry wherever she went!!! I only watch 2 TV shows and Harry’s Law is one of them. Sooooooo sorry for the loss.

“Its audience skewed very old. It’s hard to monetize that.”
You’ve got to be kidding me!!! I’m 57, so I guess I’m OLD because this was one of my favorite shows!!! And here’s a newsflash for you Mr. network executive…we “old” people are the ones who have the money to spend in this economy, so it’s beyond me how you figure a younger demographic is easier to “monitize” to. BIG MISTAKE!!!!

I loved Harry’s Law. I loved the characters and the interaction among them. I will miss this show. Looked at the NBC lineup – what a bunch of garbage. I hope Harry’s Law finds another home – I would certainly follow it there – since NBC has nothing of interest for me to watch.

No networks care about anyone over 40. All they want is viewers that are young to watch reality shows. Harry’s Law was a great show like The Practice or Boston Legal. It was one of the few shows We watch other than the Good Wife. In fact it is the only NBC show we watch. But who cares, because we don’t spend money the advertisers like because we are over 50

Hate to see the show go, I enjoyed it a lot. NBC is old and bankrupt and ready to go. Remember they canceled Star Trek and haven’t got it right since. I have more money than those 49 year olds they covet and I spend it. I’ll be choosy where I spend it from now on. Cancelling Harry because the audience is old – F*ck NBC. Maybe they can get Leno to fill the spot.

Harry’s Law was a neat show. Everyone that was developed thru it really fit in. I loved it and didn’t miss an episode. I don’t like advertisers making decisions on what we watch.

LOVED Harry’s Law! USA or TNT should pick it up if NBC is to boneheaded not to realize that it’s the answer to the vacancy left by Boston Legal. As for their claim that the show wasn’t drawing the correct demo? I know I can’t be the ONLY 35 year old that watched religiously and completely adored getting to know these characters.