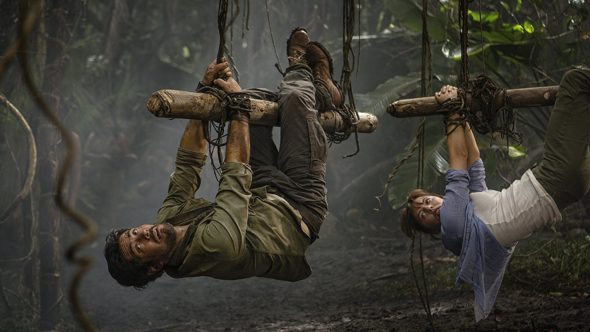 Adventurous to the point of being rash, Hooten is a charming loner, who frequently ends up in thorny circumstances. He is, however, an honorable soul at his core.

Meanwhile, the aristocratic Lady Alex is a curator at the British Museum and tends to operate by the book. Still, she loves to travel to far-flung locales, like her heroes Percy Fawcett, Howard Carter, David Livingstone, and Mary Kingsley.

Alex’s best friend, Ella (Hynes) is both highly intelligent and adept in many different areas. Alex can count on her support and assistance, no matter how many miles separate them. At the museum, they both report to Clive (Parkes), who also keeps careful track of Alex, despite her globe-trotting.

Lady Lindo-Parker (Seymour) is Alex’s cultured, cosmopolitan mother, who meets Hooten in a swanky Roman wine bar. Not one to shy away from candor, she makes it clear she is not his biggest fan.

An attractive man, Edward (Bailey) is Lady Alex’s eager fiancé. Although he can’t wait for their wedding, Alex’s itinerary leaves them little time to see one another.

After Hooten and Alex meet in the Amazon jungle, this implausible pair partners up to search the world for obscure artifacts and other mysterious objects. Thanks to their different natures, their partnership is often a bit bumpy. Still, practical considerations and the risky nature of their quests bring them together, as they travel to places including Bhutan, Moscow, Rome and Egypt, on the hunt for missing treasure.

Series Finale:
Episode #8 — The Caribbean
Alex (Ophelia Lovibond) puts her wedding in jeopardy when she follows Hooten (Michael Landes) to an idyllic island in the Caribbean to hunt for the long lost pirate treasure.
First aired: September 11, 2017.

What do you think? Do you like the Hooten & The Lady TV series? Should it have been cancelled or renewed for a second season on The CW?

Hooten and The Lady was rollicking good clean fun. The two main characters had a flirty rapport with lots of funny retorts.
There is plenty of scope to develop the series for another year or so and maybe longer if the direction of the adventure became more developed.
As I said good clean fun, and needs to be on at a reasonable time.