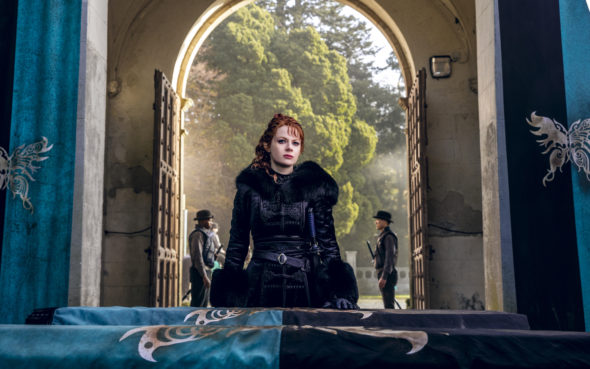 Season three kicks off after Veil’s death. Sunny (Wu) and his son, Henry, are living off the grid, when the baby takes ill. Sunny teams up with Bajie (Frost) to journey back into the Badlands, where The Widow (Beecham) and Baron Chau (Matsuura) are engaged in a protracted war. Meanwhile, an enigmatic nomad named Pilgrim (Ceesay) arrives with claims of ushering in a new era of “peace.” Soon, enemies will ally themselves to defend the Badlands.

The third season of Into the Badlands is averaging a 0.27 rating in the 18-49 demographic and 851,000 viewers. Compared to season two, that’s down by 65% and 57%, respectively. Learn how Into the Badlands stacks up against other AMC TV shows.

Will AMC cancel or renew Into the Badlands for season four? The ratings are way down but the show is still a middle of the road performer for AMC. I suspect the show will be renewed but that prediction could change if the numbers keep falling. I’ll keep a hungry eye on the ratings and update this page with breaking developments. Subscribe for free Into the Badlands cancellation or renewal alerts.

2/10/19 update: AMC has decided to end Into the Badlands so there won’t be a fourth season.

Please give us season 4!

This needs to be continued. My entire family is upset that there isn’t more.

This show is badass, you can’t just end it on a cliff hanger like that, it must go on at least for one more season to actually end the story

Please give us a season 4!

Still disappointed that there no season four untill now,we need it

Does anyone now were i can find season 4 please

Please reconsider fourth season for into the badlands. This show was action filled with not so much bad language. Would love to see the end to the finish not stop when the war is still going.

This really sucks they are not doing season 4. Hands down one of the best action tv shows AMC should be ashamed of themselves to just leave their viewers hanging out to dry after that last episode. Into the badlands was great from start to finish. But the walking dead on the other hand fell off drastically after Rick died but they kept it going no question. AMC is going to ****. And its funny because it’s happening after they charged all these cable companies extra for their services. ✌️AMC

I think that it is a disease to not film season four, you owe it to your viewers. I feel that the producer, and the director shouldnt have jobs because of the fact that if your in this type of business you do not start projects and not finish them. It’s a disgrace. I get that covid 19 has put a stop on a lot of projects and it’s going to be a while before tapering will resume , hit to just cancel it is a load of crap.

We all need to see what’s next and have at least a finaly season or a movie of the finally. It would be very stupid to leave such a heavy cliff hanger and not finalize the shows real ending.
I just got into watching this show and found it the be very intresting and nice to watch, it was perfect way to produce clean shows today!
Had all the right gifts in all the rights places.
I beg you not to let it fall like Fire Fly did. BRING THIS BACK!

This was a big mistake canceling the show please bring it back there’s nothing like it on TV and I think it would be well watched now, you should’ve brought it back during this epidemic since everybody’s at home.