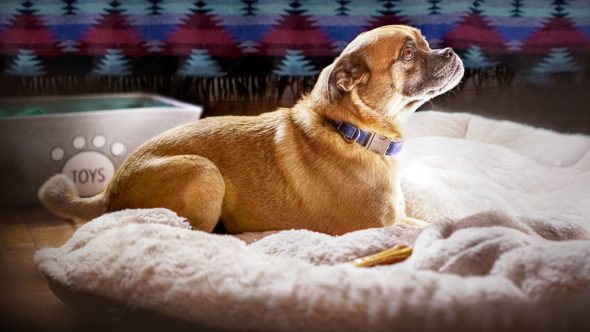 Are you falling in puppy love with the first season of the It’s Bruno! TV show on Netflix? As we all know, the Nielsen ratings typically play a big role in determining whether TV shows are cancelled or renewed. Netflix and other streaming platforms, however, collect their own data. If you’ve been watching this TV series, we’d love to know how you feel about the It’s Bruno! season one episodes. We invite you to rate them for us here.

What do you think? Which season one episodes of the It’s Bruno! TV series do you rate as wonderful, terrible, or somewhere between? Should Netflix cancel or renew It’s Bruno! for a second season? Don’t forget to vote, and share your thoughts, below.

We need more Malcolm, Bruno and Bushwick right now, or yesterday—certainly by tomorrow!
These episodes are short shots of wonderful. Just the right amounts of nutso, neighborhood and dog-love.
Come baaack, Bruno!!!

I need more It’s Bruno in my life! Bring it back please! Hilarious and quirky show that many can relate to with the love for our animals!

My family and I love the show!!!!! The characters the plot and the fact it’s filmed in Bushwick, Brooklyn. I am a dog owner and still live in Brooklyn. The show is hilarious and puts a smile on our faces. We want more adventures with Malcolm and Bruno!!!! We loved **** and run it had us literally laughing out loud. We loved all the episodes some were shorter than others but it’s so good I think they should be at least 30 minutes. We want more and hopefully we will get a full season. Please bring it back!!!!

Very funny,we love it,Bruno is adorable & all the shows characters are hillious & unlike any show streaming.This had us lol & wanting more & more Bruno & Malcom! Great job on bringing these crazy character’s to life! We can’t wait for more!

Please renew It’s Bruno. The show is the funniest and most entertaining show on television. I am hooked and begging you to please renew.

Oh…Please do renew this show for a second season. It’s Bruno is both hilarious and cute. The actors, two and four legged, really crack me up. If you need a cool little dude to act in Season two, I know the perfect dog . His name is Bernie aka “Al Pachino” and he really has a way with the ladies. So, watch out Bruno!

Bring Bruno Back!!!! Funny show.. My son picked it to watch because Bruno looks just like our dog chewy!!

I would love to see the show return. It’s simple and funny. It’s different and refreshing.

When I read the description for the show It’s Bruno I thought I probably would pass on it. However, I gave it a chance and watched one episode. The show was hilarious and I was hooked. It is original and witty with outrageous characters. Bruno is adorable! I saw the entire first season in one day. I hope It’s Bruno comes back for another season because it is laugh out loud funny.

Glad to see we weren’t the only ones to watch the whole show in a day.Bring Bruno & Malcome back! I’m a cat purrson but i fell hard for Bruno & Angie & that little crazy dog who gets rowdy with Bruno & Malcome in the park & vets office.That dog is crazy,little knife carrying lunitic,we laughed our butts off,over & over again!