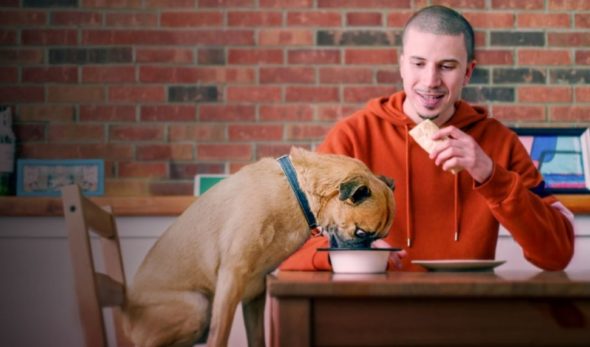 TV show description:
From creator Solvan Naim, the It’s Bruno! TV show is a single-camera comedy. The series focuses on a man named Malcolm (Naim) and his dog, Bruno, living life in their Bushwick, Brooklyn neighborhood.

Malcolm is crazy about Bruno and takes better care of him than he does himself. He will cook dinner for the dog, while he eats convenience foods.

Malcolm’s love for Bruno leads him to be overprotective of the pooch. He takes offense when strangers pet Bruno, or won’t let him in their stores, or when obstinate neighbors call him “Charlie,” instead by his proper name.

He’s also competitive on Bruno’s behalf. When Angie, another dog in the neighborhood, responds to more commands than Bruno will, Malcolm works hard with him to remedy the situation.

One thing is for certain, Bruno and Malcolm are walking through this world together. Heaven help anyone who tries to separate them (or who calls Bruno “Charlie”).

What do you think? Do you like the It’s Bruno! TV series? Should this Netflix TV show be cancelled or renewed for another season?

I very mu ch love its bruno. Its quirky and hilarious

Love, love, love It’s Bruno!!!! Please keep making shows! I’m going to pass it on to all my friends to watch and rate.

My husband & I love this show! Bruno is so adorable and the show is funny. Keep the show on.

Keep the show on I want to watch it.

Keep it going… Netflix is cancelling too many good shows….