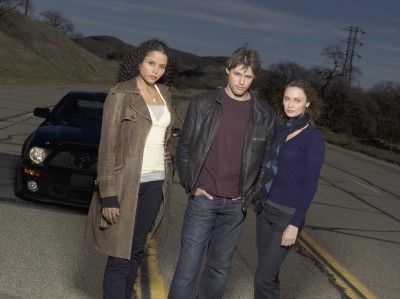 The new Knight Industries Three Thousand (KITT, voiced by Val Kilmer) is faster and more powerful than its predecessors. It’s a supercomputer automobile that can hack into almost any system; its weapons systems efficient; and its body is capable of actually shifting shape and color. On top of that, KITT’s artificial intelligence makes it the ideal crime-fighting partner: logical, precise, and possessing infinite knowledge. It’s the ultimate car — one that some would be willing to do anything to obtain.

Sarah Graiman (Deanna Russo) is a 24-year old Ph.D candidate at Stanford University who’s following in the footsteps of her genius father, Charles Graiman (Bruce Davison). After some men try to abduct her, Sarah receives a mysterious call from KITT warning her that he’s a creation of Charles, who also invented the first KITT 25 years ago — and that her father is in serious danger.

Together, they seek out the help of Mike Traceur (Justin Bruening), a 23-year-old ex-Army Ranger who has a strange connection to KITT. Mike left home at the age of 18, served in Iraq, and returned home feeling jaded and lost. Sarah and KITT eventually convince Mike to help them. They’re assisted by Carrie Rivai (Sydney Tamiia Poitier), a tough FBI agent who has a long friendship to Charles and Sarah.

Series Finale:
Episode 17 — I Love the Knight Life
Mike and KITT must find a stolen experimental serum called HXP that maximizes physical strength it can be sold to North Korean buyers on the world market. When Mike corners the main suspect, Galt, he finds that the criminal has overdosed on the serum and possesses super-human strength.
First aired: March 4, 2009.

CANCEL it…Bring back LIFE instead. Crews can use the car..

I wish that you would not cancel this show I feel that it was better than the original and has a lot more interment now than a show in the same time slot. If it is cancelled I hope that another station picks it up and proves to yu how much peple loved it.

I watched Knight Rider in the 80’s and loved it, now is no different. Its also one, of very few programs, I can watch with my children that we all enjoy. I don’t understand how networks decide what shows to cancel but Knight Rider should be given another chance. Its time to starting taping new episodes.

For sure,the rating for other NBC shows will definately go down as well.No one is going to trust NBC if these cancellation of good shows continues

I have news for you nbc. If you cancel Knight Rider you will lose alot of fans. And you people who want it canceled if you don’t like it don’t watch so back off

this show had not been given a chance. let it continue and let it show everyone how it really can be. this show by far was one of the best they have on. the network doesn’t know what they are doing and need to get a brain. so please bring it back and let it stay!!!!!!!!

Another great show that should NOT be cancelled !!!!!!! I’m getting sick of watching every episode of a show just to have it cancelled.

Im very sad they are canceling this. And also heard word of canceling of Medium and maybe even heroes well after they cancel those there wont be any point to even watch NBC Grats on losing alot of viewers. Yet they keep retarded shows such as chuck and Recreational Parks or what ever that garbage is. I guess they aim for a low IQ audience

Please cancel the show. It’s an embarrassment to the original series!

The ratings system does not work anymore. Now with PVRs and Hulu and BitTorrent. Embrace the new tech and figure out how to track viewership.

Knight Rider is a good show and needs live on!!!

Seriously!! You can’t cancel this show!!!
I know some people don’t like it but others do!!!
Don’t cancel it!!