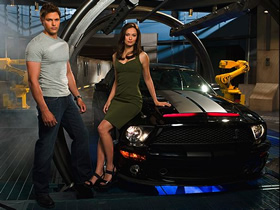 Not to happy they need bring back auto man

I’m not happy about them cancelling this show

Even though I am watching the episodes of Knight Rider after they been taken off the air. I like the show, maybe start streaming the tv series. As you know alot of people are starting to stream, because cable and satalight are getting to expensive, for me streaming is the way to go. I am watching old shows like the Equalizer, Six Million Dollar Man, and Batlestar Galactica (1978). I like watching alot of these type of showes.

Knight rider 2008 is amazing it makes perfect sense to me I am sad that there is only one season. The show is so exciting and incredible I want to keep watching the episodes. I am always excited to see what comes next and I hope that there can be a season 2,3, and 4 if possible. Please take this into consideration. I’m begging you don’t cancel it and keep it going because I know I will watch it and I’m sure other people will too when they see how awesome it is.

Knight rider new one is a better than old seriously great ,im don’t telling old one is bad but new knight industry 3000 have new features i like those things plz don’t cancel new knight rider im begging you don’t cancel…….