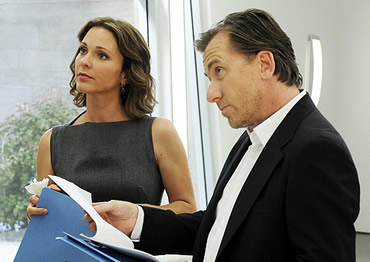 This evening, FOX is airing the final episode of Lie to Me’s third season. Will the series be back for a fourth season or will it be cancelled? The answer may have a lot to do with how well the show performs tonight.

Last season, Lie to Me averaged a 2.9 rating in the all-important 18-49 demographic and 8.03 million total viewers. This season has been a different story. The series hasn’t been performing nearly as well and FOX declined to give the series an order for the back nine, leaving the season at 13 installments. That’s often a sign that the network has given up on a series and will just use up what they have left.

But then, the next week, Lie to Me registered a 20% gain in the demo. Last week, it saw an astounding 39% gain — moving up to a 2.5 rating and 7.67 million viewers. That represents a season high for the drama. If the series can sustain that rating tonight, it could be encouraging enough for FOX execs to greenlight a fourth season.

Despite the low ratings, the producers certainly don’t feel like the network has given up on Lie to Me. In a recent interview, showrunner Alex Cary said, “Fox has been very clear with us — they know what the show is, they know what it can do. [The ratings bump] shows that people will come watch the show.”

Cary also indicated that tonight’s finale goes to the heart of Lightman and Foster and their strong emotional bond. He noted, “We’re very happy with it. We think it will make the fans only more hungry for a season four.”

What do you think? Will Lie to Me be back for season four or will it be cancelled? Will you be satisfied if this is the end?

So sad that Lie To Me was cancelled. Such a good show week in and out. What a shame to cancel this show.

Loved this show~sad and angry it was cancelled…. Who are these people watching t.v.? The Nielson raters are obviously “PLUNKERS”!!! Hahahahaaah! Bring it back!

Please bring this series back my wife and I just watched every episode by buying the dvd’s of this show. We we astounded to find out that it’s already cancelled! We love this show and want it back!

lie to me was definately in a bad time slot. 8 pm is not conducive to alot of your fans schedule. Later in the evening would be more appropriate and im sure you would see a spike in the ratings.

I love this show. Deeply sad I won’t be watching it on Mondays. Please bring it back!

just watched over 35 episodes of Lie to Me and I want MORE!!!! please bring a season 4

Lie to me is one of my family and l’s favorite show. It would b a shame if were cancelled!!!

Great show. I have loved it. Do not cancel. Bring it back, please!

Just saw this show for the first time a week ago
Best thing on tv bought all three seasons! Had no idea the series
Was three years old …”FOX” you did an injustice
To a great show with poor promotion and or bad time slot
Because I work with over 100 ppl who when I was sharing
What a great show it is no one had ever heard of it. The show is spot on!!

Lie to me is definately a keeper…DONT CAN IT…CONTINUE IT..please I am a HUGE fan of the show…Didnt miss an episode while it was on

I love the show LIE TO ME. Me and my entire family are HUGE fans. Please don’t cancel it. We don’t watch much tv, but this is one of the programs that we do watch.

Lie to me is definately a keeper…DONT CAN IT…CONTINUE IT..please I am a HUGE fan of the show…Didnt miss an episode while it was on

Why would Fox cancel one of the best shows on TV? What a mindless decision! There are few shows to watch with the combination of both great acting as well as original content. Lie To Me needs to return for another season.