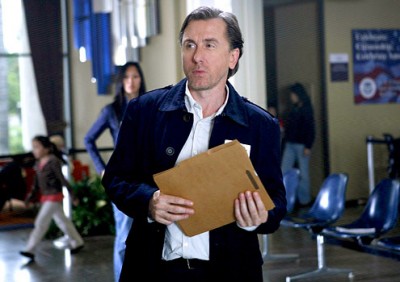 Sometimes the truth hurts — especially when it comes to television ratings. After three seasons, FOX has cancelled Lie to Me.

Starring Tim Roth, Lie to Me revolves around Cal Lightman and members of The Lightman Group. They’re a team of specialists who help law enforcement agencies uncover the truth by using applied psychology. Others in the cast include Kelli Williams, Brendan Hines, Monica Raymund, Hayley McFarland, and Mekhi Phifer.

Last season, Lie to Me averaged a 2.9 rating in the all-important 18-49 demographic and 8.03 million total viewers. That was down from season one and the series found itself on the bubble for renewal. FOX ended up giving the TV series another chance and renewed it for 13 episodes.

Unfortunately, season three didn’t perform nearly as well as season two. It premiered last October to a 2.1 rating in the demo and 5.86 million. Viewership eroded in subsequent weeks and FOX declined to give the show a full season order. Lie to Me then hit a new series low in January, registering a meager 1.5 rating and 5.43 million viewers.

In its final weeks on the air, viewers seemed to rally behind it and Lie to Me had its best ratings of the season — a 2.5 in the demo and 7.67 million.

Though the ratings had come way down, FOX execs claimed that they still valued the TV series and saw it as a solid utility player. Showrunner Alex Cary said, “Fox has been very clear with us — they know what the show is, they know what it can do. [The ratings bump] shows that people will come watch the show.”

Now, after three seasons on the air, the series is over. FOX has officially cancelled Lie to Me after 48 episodes. All of the installments have aired. Though there are too few episodes for a traditional syndication package, the first two seasons have already been released on DVD.

What do you think? Should Lie to Me have been renewed for season four?

I loved this show, I can’t believed they cancelled & left everything up in the air. It’s so annoying when things aren’t closed off properly. If they have an idea that it’s not as popular as the powers that be thought it should be at least have the decency to conclude it. I loved this show the dynamic between the main characters was interesting & kept me watching to see how things played out. Tim Roth was great & I loved that they didn’t Americanise his Britishness. Gutted

I can’t believe they canceled Lie to Me it was my favorite show! Yet all these other shows that are horrible is still on the air. What were they thinking? Bring back Lie to Me!!!!!

Yes pls. It was enjoyable and interesting

I loved the show Lie to Me. I love the science behind it. I also love the fact that I can relate to Torres being a natural. Both sides intreged me equally. I have all 3 seasons. I also can not help myself from watching the 3 seasons again and again. I wish Fox would have kept it on TV. Great show, I would love to know what 10% is missing.

My favorite show of all time, that is why they canceled it. I just don’t understand as season three was spectacular. I know critic I just know what I like. All I can say is Bolick.

Personally, my favorite show of all times. A true pity

You should have never cancelled it. You people have
Been in Hollywood too long and wouldn’t know a great series if it won an award!