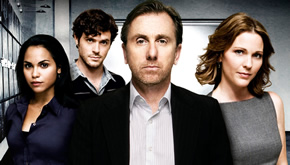 TV show description:
The average person tells three lies in ten minutes of conversation and Dr. Cal Lightman (Tim Roth) can spot them. He detects the truth by analyzing a person’s face, body, voice and speech. By analyzing facial expressions, Lightman can read feelings — from hidden resentment to sexual attraction to jealousy. He’s the world’s leading deception expert, a scientist who studies involuntary body language to uncover not only if someone is lying but why.

Unfortunately, as Lightman knows all too well, his scientific ability is both a blessing and a curse in his personal life, where family and friends often deceive each other as readily as criminals and strangers do.

Lightman heads a team of experts at The Lightman Group who assist federal law enforcement, government agencies and local police with their most difficult cases.

Dr. Gillian Foster (Kelli Williams) is a gifted psychologist and Lightman’s professional partner who looks at the bigger picture while he focuses on the details. He needs her guidance and insight into human behavior, whether he knows it or not.

Eli Loker (Brendan Hines) is the team’s lead researcher, who is so uncomfortable with the human tendency to lie that he’s decided to practice what he calls “radical honesty.” He says everything on his mind at all times and often pays the price for it.

Ria Torres (Monica Raymund) is the newest member of the agency, and one of the few “naturals” in the field of deception detection. She has a raw, untrained ability to read people that makes her a force to be reckoned with.

The series is inspired by the scientific discoveries of Dr. Paul Ekman, a real-life specialist who can read clues embedded in the human face, body and voice to expose both the truth and lies in criminal investigations.

Series Finale:
Episode 48 — Killer App
Cal wanders through the office of social network app Seekout, taking pictures with his smartphone. Then he confronts Zach Morstein about firing one of his co-founders, Kyle Putnam, just before the company went public and made billions. Zach figures that the company’s third co-founder, Claire, must’ve hired Cal, adding that he and Claire are longtime friends. So tell her she’s safe, Zach says with a smirk.

When Cal and Gillian meet Claire at the Lightman Group office, Cal’s concerned about Zach’s smirk and fears that Claire will suffer the same fate as Kyle. Claire admits that Zach has changed, but she says that they’re still friends and she doesn’t want to fight him. When Cal wonders if the change is more personal than business-oriented, Claire clams up and leaves.

While Gillian – who was Claire’s former therapist – vows to protect her, Eli observes that Claire quickly took Zach’s side. Gillian claims that Claire is simply conflicted because friendship means everything to her.

Meanwhile, a young man enters Cal’s empty office, sees a $100 bill on the desk, and walks away. Cal – who’s been watching – stops him. He’s Marquis “Key” Turner, and Ria wants Cal to give him a job. Cal wants someone followed and gives Key the $100 for expenses.

Cal comes home to a moaning Emily, who’s getting her hamstrings stretched by Liam; just then Gillian calls. Cal races away and finds Gillian in tears because she went to check on Claire, found she’d been stabbed, and couldn’t save her.

Detective Wallowski tells Cal and Gillian that the Seekout app on Claire’s phone placed Kyle in Claire’s apartment at the time of her murder. Cal says that Kyle is not the killer. Wallowski adds that the cellphone tower records corroborate Kyle’s presence and those records can’t be faked. Cal is still unconvinced.

Gillian and Cal visit Zach, who pins Gillian as a therapist, noting that Cal has trust issues because he knows Cal’s been constantly Googling Liam. With an arrogance that barely conceals his anger, Zach produces a signed statement from Claire indicating that Kyle was due nothing, so he had no reason to kill her. Smirk.

When Wallowski tells Cal that Kyle called Claire three times on the day she was killed, Cal wants to put Kyle and Zach in the cube, but Wallowski refuses, noting that Kyle has lawyers and she has no reason to arrest Zach.

Cal confronts Kyle at a coffee shop, telling him that those corporate lawyers are useless in a murder case. Kyle describes how Zach once hacked the local cell network of a girl he liked and read her texts to get to know her better, but this left an electronic trail. Kyle believes that Zach pulled a similar stunt to frame him, which he intends to prove. He also admits calling Claire because he heard that Zach was angered by Cal’s visit, and agrees to continue his work at Cal’s office.

Cal finds Wallowski studying the murder scene, notices a framed photo of Claire’s grandmother placed face down next to the sofa, and convinces Wallowski that Claire had sex before she was killed.

Cal asks Zach about his sexual relationship with Claire, which he denies. Gillian and Ria ask Kyle the same question, which he also denies, then admits he concealed it because he knew it would anger Zach – and would make him a more likely murder suspect – claiming that Zach’s discovery of this relationship led to his firing.

Kyle locates the electronic trail and tries to trace it to Zach’s ISP, which activates a hidden logic bomb that wipes out the trail.

Wallowski then asks Zach how he knew about Kyle and Claire’s relationship. When he replies, “office gossip,” she says that unless he can prove those two were something beyond friends, Kyle will go free.

Zach quickly heads for his computer, where Cal, Gillian, and Kyle find him checking private messages between Kyle and Claire. Kyle – who’s patched into Zach’s computer – points out that those were anonymous messages, and Zach’s accessing them is evidence that he knew about the affair, which gives him a motive for murder.

Kyle also admits he and Claire were planning a takeover, and when Zach discovered this, he fired Kyle and forced Claire to sign those documents. Cal notes that Zach was in love with Claire, but the feeling wasn’t mutual.

When Zach claims he never touched her, Gillian angrily confronts him about the knife wound. Zach sneers that all the evidence points to Kyle, and with all my money and lawyers, “the truth doesn’t matter.” But Cal just recorded that statement on his smartphone, and Kyle broadcasts it over a computer network.

Cal then finds that Key has invaded his office and fires him for insubordination. But Key still wants Cal to pay him for his snooping, which turned up nothing. Key says that’s because Liam’s a good kid, and Cal should trust Emily, adding that Cal needs to hear the truth – and Key needs a job. OK.

Cal visits Zach in jail, telling him that he’s recommended Zach be put in a mental institution rather than prison. Why? Because prison will only take away Zach’s freedom, but the institution’s pills could take away his mind – and Dr. Gillian Foster will make sure that they do.

Cal goes home and learns that Emily broke up with Liam because he didn’t believe in sex before marriage. She asks him if he loves Gillian. When Cal admits that he does, Emily asks what he’s waiting for. Cal sighs, “I don’t have an answer for that one, luv.”
First aired: January 31, 2011.

Lie to Me was awesome! What the hell is wrong with Fox?!?!
No wonder comedians are always cracking jokes about the network….. It sucks!!

Fox sucks…this was the best thing ever!

I agree bring it back. I rewatched all the episodes on Hulu and I want more!

Bring the show back, pleaaaase!

Lie To Me was a “must see” once we discovered it….brilliant premise, truly relevant, instructive more than some would have us be, and thanks to excellent performances we were intrigued from Moment One. Let’s get it back on a willing network!

Brandi took the words right out of my mouth.

Loved the show, Quit canceling quality shows and replacing it with reality crap !!!!!

PLEASE put LIE TO ME back on some channel so all the people that “LOVED it could
watch one of the greatest shows ever can watch it. With a poll or something you could find out how many fans really watched it. If you advertise that it coming back, you would
see just how many fans really still think Lie to me is still coming. I can’t believe the people from the show would ask for too much money to have it come back. LIE TO ME
IS ONE OF THE “was and could be a “BEST” shows on TV.
Thanks,
Mark

Couldn’t agree more with the previous comments, this was/is a great show! My husband and I were waiting for it’s return and wondering why we were beginning to see actors on other shows, come to find out is because they are out of work. This show needs to come back! Come on Fox, and if not Fox maybe another network would be willing to pick it up!

Bring the show back! I’m so disappointed that it has been canceled. I use to rush home and through my homework assignments in order to watch the show. The show has me considering psychology as an element to my field in art and eduction, man fox sucks! I agree with the previous fans that commented by saying that fox should have promoted the show more because I never saw an advertisement for it I found out through a friend and by that time watched the show on net flix. The cast should go to another tv station other than fox… Read more »

Of course it’s cancelled. It is an intelligent show that must make room for the non-provoking reality shows that focus on the inept!
It never fails to amaze me that when a really good show like “Lie to Me” comes along, it lasts for 1 or 2 possibly 3 seasons, then zap!!!
I vote to bring it back!!! There is still time to get it in the works again!

Seriously. we were waiting for the season to start and when we found out it is cancelled….what the Heck.
This was an awesome show and cant believe it is over……..What are you people thinkin?