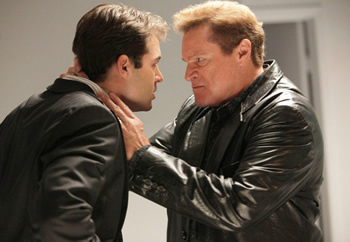 We all saw it coming. One of the most anticipated TV shows of the new fall season, Lone Star, has been cancelled after two episodes.

Lone Star centers around a handsome conman (James Wolk) who lives a double life to swindle investors and an oil tycoon family. He starts to have regrets and struggles to balance both lives and keep everybody happy. Others in the series are Jon Voight, Adrianne Palicki, Bryce Johnson, David Keith, Eloise Mumford, and Mark Deklin.

The FOX series debuted last week to a very disappointing 1.3 rating in the 18-49 demographic and 4.1 million total viewers. Last night, despite several days of buzz and campaigning to get new viewers, the ratings fell even lower to a 1.0 rating in the demo and 3.23 million viewers. As was the case in week one, many people who started watching tuned out before the episode was over. For whatever reason, it just didn’t click.

Lone Star has been cancelled effective immediately and the three remaining unaired episodes have been shelved. There’s no word if FOX will get around to releasing the remaining episodes at some point in the future.

Last week, the cast and crew were shooting the sixth installment. Production has now been shut down and it’s unclear if that episode was completed.

Lone Star’s spot will be filled by the season three premiere of Lie to Me.

What do you think? Are you sorry to see Lone Star be cancelled? If you watched, where do you think it went wrong?

UPDATE: Subsequent reports have indicated that there are six completed episodes with four left unaired.

I thought the first two episodes were great. They didn’t give us enough time to get into it. I am really disappointed they dropped the show. Maybe you had it in the wrong spot. I liked the characters and story. Bring it back.

Im bummed. I was wondering were it went. I really wanted to know what was going to happen next.

Pretty good. Should have had a chance.

Me and my co-worker had started watching it and then all of a sudden it disappeared. Its still in my DVR so if it ever comes back on, it’ll record. I really got into it. =(

I loved the show and was wondering what happened to it. It was different and very interesting. I can’t believe the network cancelled it so suddenly. Maybe there wasn’t enough sex and violence to satify other viewers.

I am not happy about this at all. I really liked this show, it was different from others, something like a movie I would go see but in a series form. I just don’t understand why not let it play out longer instead of just yanking the cord on the show. I would love to see it come back and maybe try a different day of the week.

I saw the first episode on a DVD included in a magazine and thought it was very clever and looked forward to it.

yeah, it’s a bummer, I kept wondering if i missed something, but this confirms it isn’t coming back…..i was gearing up to follow the story, i think it had a good cast going, shame Lone Star lost it’s chance to shine.

It really sucks. All these great shows get canceled because they require a brain to watch. Sad.

SOO mad they cancelled! LOVED the first 2 episodes, and REALLY hope they bring it back…SOON!

I am so mad I loved the show, take the show to HBO , will I ever get to see the rest

Actually enjoyed first two episodes and would like to be able to view the 4remaining episodes, even online

This show seems to fit the bill for the intelligent viewers, which apparently don’t frequent FOX too often. This would have been excellent as an HBO series, it could have fit right in with Big Love. Sorry to see it go so soon!