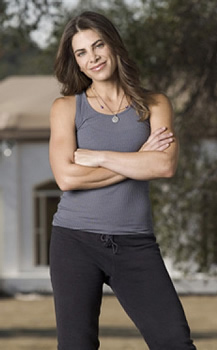 Having found great success with The Biggest Loser, NBC has been running another weight-loss show, Losing It with Jillian. Will this new show stick around as long as the old?

Losing It with Jillian is a reality show that stars Jillian Michaels, a personal trainer who’s appeared on The Biggest Loser. Each week, Michaels visits a new family and attempts to get them on the road to healthy eating and fitness.

The NBC series debuted on June 1st to a 2.6 rating in the 18-49 demographic and 6.44 million viewers. While not great, those are decent numbers for a reality show debuting near the start of summer.

Unfortunately, many of those viewers didn’t return week after week. For episode two, the ratings dropped to a 2.1 in the demo and 5.7 million. By episode four, viewership dropped to a 1.2 rating and 3.72 million viewers. Last week’s was about the same and there are only two installments left.

Though reality shows are cheaper to produce than scripted fare, NBC has no reason to bring Losing It with Jillian back for a second season. The ratings aren’t good and they run the risk of weakening their Biggest Loser show by overexposing Michaels.

But, what do you think? Is Losing It with Jillian worth watching or should it be cancelled already? Is it better than Biggest Loser?

I love the show, I wish there were more episodes to watch!

I really enjoyed the show. It helped me alot. My husband even watched it with me and he hates those kind a show’s.

Jillian is awesome and the government should fund the show as it would save them money on diabetes meds. This is actually an economical issue, as the majority of peeps in the States are overweight and it is actually a security risk at this point. I don’t think that Al Queda or HomeGrown Terrorism is what will bring us down. Well, maybe the “home-grown” fast food hamburger with the tv dinner and the white flour. These families need a wake-up call or they will literally die from very easily preventible causes. America needs this wake-up call and maybe someone should… Read more »

I loved the show but I felt it lacking on helping those that watched it and that is why so many viewers stopped watching. I would have loved to see Jillian show us all some tricks to working out as well as some ideas on eatting better like she did with the brownies. If they actually did that then more people would be interested in watching. Otherwise you are just watching a show and seeing results and never really know what went on besides them getting on a treadmill and going to the gym. Sad really since I was so… Read more »

I watch this show and work out to it, so I think it is a great motivator. Please keep it

Please consider KEEPING this show going!!! It shows a powerful and more approachable Jillian. She inspires me to pieces. I get so inspired every tuesday. Please dont cancel the show!

Please keep the show!! I love it and I love Jillian. She is my role model. I think she’s helping out families a lot more with this show than with The Biggest Loser because she not only makes them healthier but helps with family dynamics and other issues.

KEEP THE SHOW!!! I was so bummed there weren’t very many episodes!! KEEP KEEP KEEP… I will watch it!

Keep the show, love it and extremely motivating!

Great show. Overexposure my rear. Keep it NBC. We want more of JM!

I love this show. I think it’s so positive and inspiring. I used to watch The Biggest Loser, but it’s the same every season and it’s getting so old. If NBC has to chose between one or the other I think Losing it with Jillian is the evolution.

I loved it, sad to hear not many others were watching!! My son and I watch together and we get a kick out of this little lady. Will miss the show if it goes.

I say keep it! We learned alot from this show and too many american have obesity issue including myself! This will help us keep motivated at the goal of losing excessive weight.

love the show keep it.