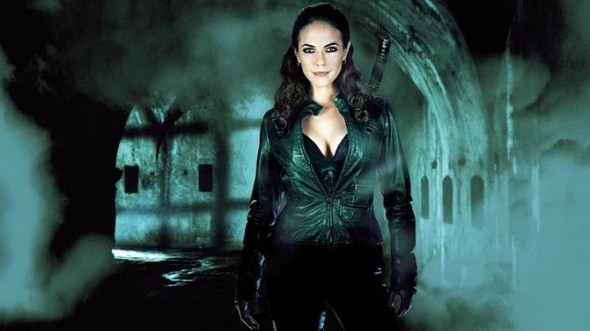 Syfy is still airing the fourth season of Lost Girl but the series has been renewed for a fifth season of 13 episodes in Canada where it’s produced. While the US cable channel hasn’t made an announcement yet, it’s expected that season five will air here in the states as well.

Here’s the press release from Showcase:

Showcase has greenlit a fifth season of its hit Canadian original series, Lost Girl for 13 episodes. The homegrown hit series starring Anna Silk begins production on season five this spring and is set to air Fall 2014.

Throughout the fourth season Bo was plagued by memory loss that left her with more questions than answers, especially upon learning of her inexplicable decision to officially join the Dark Fae. The season’s emotional journey exposed Bo and her friends to new loves, heartbreaking losses and shocking betrayals, all leading to the season finale that saw her battle a darkness within herself.

What do you think? Do you like Lost Girl? Have you been watching season four on Syfy?

Please don’t let the Canadians have this show all to themselves. I’m with Leslie, I love Lost Girl, Haven, and Sanctuary.

I like lost girl and would like to know if there is a season 5. This is one of three show I watch Haven is another and sanctuary was the other one. So please keep this show on and try and find another one that I could like.

Im so excited, I love this, and I’m glad they did not just leave it hanging!
Yay lost girl.

Can the show move on from the love triangle? I would like to see Bo have different relationships besides Lauren and Dyson. I loved that LInda Hamilton supports the show and hopefully we will see her again.

I love lost girl and I hope that the story continues beyond season 5. I can’t get enough of the cast especially Bo, Kenzi, Tamsin Dyson, Vex and the Morrigan. I hope that they bring Kenzi back because Bo will always need her by her side no matter what.

Lauren is my favorite. The show wouldn’t be nearly as good if she weren’t a part of it. I love the human aspect of the show, both Kenzi and Lauren are her heart and are the ones that keep Bo grounded.

I love lost girl and I hope that the story continues beyond season 5. I can’t get enough of the cast especially Bo, Kenzi, Tamsin Dyson, Vex and the Morrigan. I hope that they bring Kenzi back because Bo will always need her by her side no matter what.

I love the show it’s the best, I just can’t get enough of it. I wish they had more episodes in a season.

Oh my gosh are they going to bring back hail . I’m dying I love hail.. I love everything about the sirens. Please bring him back

Hey, why wasn’t Ksenia Solo mentioned? She is an important part of the show.

I am glad that the show has been renewed. I like the genre and idea that something/someone inherently supposed to be evil like a succubus would choose not to be.

I’ve seen all 4 seasons. love it.
I can’t wait til season 5, to see Kenzie again. Maybe.

Great news, I am DVRing Season 4, have only watched Eps 1 so far. Will do a 4-6 episode sit and watch soon.

Best news of the day!

I came across this show by accident, and have stayed with it since then. I am a fan and was hoping that it wold get another season. Thanks goodness it is not on one of the three major networks run by idiots. Way to go SYFY