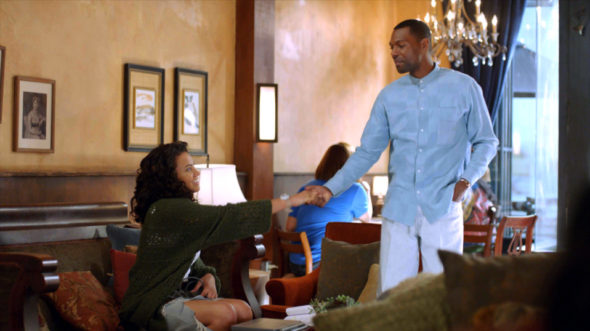 Do you love or hate the first season of the Love Is ___ TV show on OWN? As we all know, the Nielsen ratings typically play a big role in determining whether a TV show like Love Is is cancelled or renewed for season two. Unfortunately, most of us do not live in Nielsen households. Because many viewers feel frustration when their viewing habits and opinions aren’t considered, we’d like to offer you the chance to rate all of the Love Is season one episodes here.

What do you think? Which season one episodes of the Love Is ___ TV series do you rate as wonderful, terrible, or somewhere between? Should OWN cancel or renew Love Is ___ for a second season? Don’t forget to vote, and share your thoughts, below.

12/19/18 update: The series was subsequently cancelled by OWN so there won’t be a second season of Love Is ___ after all. Details here.

Love Is was a very new and refreshing tv show. I look forward to the next week to see how black couples work through their issues together. All these other shows are not showing anything positive. #EMP. BRING IT BACK…

Love Is is an excellent show. It’s a feel good show. Even with the problemS they encounter, their love brings them back to the table. I love it! I personally would love to be a part of something so beautiful and hopeful. Keep it coming!

I LOVE “LOVE IS” the characters are PERFECT. The Love Story is soooooo beautiful and beyond needed at this time especially among blacks. Everything is so serious right now WE, I need way more “Love Is”. I would have a hard time staying with Own network with out it Although I so like some of the other shows, “Love Is” is the show we need right now, right here. No killings, No Drugs, No real cussing, just plain old real LOVE. This is real talk from a 67 year old Black Woman. Thanks for listening