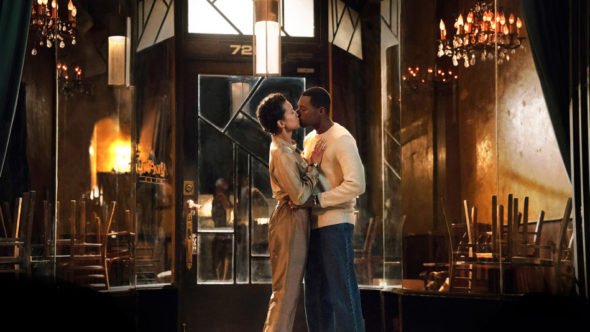 TV show description:
A dramedy from showrunner Mara Brock Akil and Salim Akil, the Love Is ___ TV show is inspired by the real lives of its executive producers. The story explores how a modern “power couple” balances their professional, personal, and family lives.

As movers and shakers in “Black Hollywood,” Nuri (Weaver) and Yasir (Catlett) must conduct quite the balancing act and have mastered some tricky social mores along the way. The series delves into the good, the bad, and even the 1990s, where it all began for them (nb. in the 2027 storyline Nuri is played by Young).

An exuberant dreamer, Nuri is toiling as a sitcom staff writer, but she aspires to really make something of herself. Her personal life has not been slow, but it hasn’t been all that fulfilling either — until she meets Yasir. Even though he’s ready to give up on all his big plans, Yasir may just be perfect for Nuri.

He’s an aspiring writer and director, and his unemployment is about to run out. He’s been staying with his ex, Ruby (Wong-Loi-Sing), but after meeting Nuri, Yasir feels the need to change his life and reach his potential.

Nuri’s co-worker, Angela (Victor), is a frustrated drama writer, stuck working on a comedy which leaves her uninspired. While she can come off as hard-edged and cold, she’s much warmer with Nuri, and they’re good friends.

Rounding out their circle are Sean (Brown), who once used Yasir as his wingman in an attempt to woo Nuri. Then there’s Norman (Hardison), the EP of Marvin, Nuri’s sitcom, who can be a harsh task-master.

What do you think? Do you like the Love Is ___ TV series? Should this OWN TV show have been cancelled or renewed for a second season?

I just found this show!! It is truly AMAZING!! Full of beautiful heart tugging moments, and rolling on the floor laughs. Love is____ also teaches you about relationships and makes you examine your own. It also makes me reminisce about the old days ( 80’s & 90’s) This show is my peace. PLEASE BRING THE SHOW BACK.

Please bring…LOVE IS..back that was one of my favorite series and I enjoyed the love between the 2 main characters…

I didn’t realize the series had been cancelled. I was so looking forward to it’s continuance. Please bring it back!

Can’t wait to see I Loving You Is Wrong on March 31.

I loved the series Love Is I was so looking forward to seeing Season 2 .

I loved this show.. It was one of the better shows on this network, It had a real feel to it, real life situations that relationship have. Don’t know who make decisions but this one was not wise. Will miss this show.

My husband and I really like the series and wish it would be renewed. Excellent TV showing black positive love for once.

I really was looking forward to season 2 I fell in love with the authentic love story about real people . It was a breath of fresh air . Im disappointed that it was canceled.

I am crushed that the show will not be renewed. Was so looking forward to such a fresh approach to real life romance, oh well.

I am sooooo HURT, I absolutely loved this show ! Please bring it back plezzz

I loved this show. Why was it cancelled?