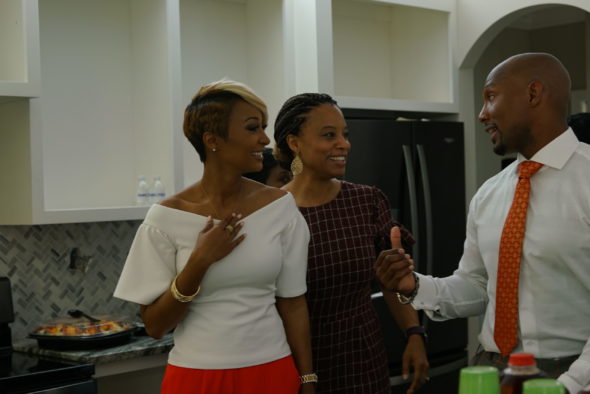 OWN is keeping four of its current unscripted series around for another season. The network has renewed Love & Marriage: Huntsville, Ready to Love, Black Women OWN the Conversation and Black Love for seasons that will air later this year. Exact premiere dates were not revealed.

OWN revealed more about the renewals in a press release. Check that out below.

“OWN: Oprah Winfrey Network announced today the renewal of four of its hit unscripted series that spotlight love and relationships. Love & Marriage: Huntsville, Black Women OWN the Conversation and Ready to Love have been picked up for second seasons, and Black Love has been picked up for its fourth season. The new seasons will air later in 2020. The announcement was made today by Tina Perry, president, OWN.

“We are thrilled to continue building our unscripted slate with the return of these fan favorite series,” said Perry. “These shows collectively tell real stories that deeply resonate with our audience, and we are proud to create authentic content that’s relatable to our viewers. We look forward to keep exploring love in African American relationships.”

The network’s lineup of unscripted hits has made OWN #1 on Saturday nights on all of television for African American women. The most recent cycles of Love & Marriage: Huntsville and Ready to Love last fall garnered double-digit ratings growth in the core demo vs. their previous cycles. On average during their most recent cycles, Black Women OWN the Conversation and Black Love both ranked #1 in their time periods across all of cable for African American women.”

Produced by Kingdom Reign Entertainment and ITV America, Love & Marriage: Huntsville follows the lives of three successful and powerful couples in the thriving city of Huntsville, Alabama who are helping to revitalize the region through their individual real estate ventures. The series features longtime friends Melody and Martell Holt, Marsau and LaTisha Scott and Maurice and Kimmi Scott, whose goals are to put Huntsville on the map, but reality sets in as they struggle with the highs and lows of balancing out friendships, marriage and business. Love & Marriage: Huntsville is produced by Kingdom Reign Entertainment and ITV America with Carlos King, Angela Dugan, Bernie Schaeffer, Brent Nisbett and Andrew Hoagland serving as executive producers.

Black Women OWN the Conversation

Record-breaking Hollywood producer Will Packer’s popular dating series hosted by Thomas “Nephew Tommy” Miles explores the real-life dating interactions of sexy, successful and grown Black men and women in their mid-30s to early 50s who are each looking for lasting love and an authentic relationship. A unique twist on a typical dating show, Ready to Love, provides opportunities for both the men and women to decide who stays and who goes as the tables turn weekly in the search for true love. The new season will take the show to Houston, Texas and is currently casting sexy singles ready to find love (Oprah.com/RTL). The series is produced by Will Packer Media and Lighthearted Entertainment. Will Packer is executive producer. Will Packer Media’s Kelly Smith, Lighthearted’s Rob LaPlante and Jeff Spangler also executive produce along with Anthony Sylvester.

The NAACP Image Award-nominated docu-series from married filmmakers Codie Elaine Oliver and Tommy Oliver (The Perfect Guy) and Confluential Films seeks to answer the burning question, “What does it take to make a marriage work?” By highlighting honest, emotional and sometimes awkward love stories from the Black community featuring celebrity and real-life couples, this docuseries tries to answer that question. The Olivers set out to increase representation and create transparency around marriage in the Black community and first launched the show as newlyweds. They’ve now been married five years and are raising three sons under three years old. As their marriage and family have evolved, the show’s topics have also deepened.

What do you think? Have you watched these shows on OWN? Will you watch the new seasons?

Love and Marriage Huntsville, You all act like a bunch of high school kids. Honestly I tried to watch, corny! All the **** thats gong on now in the world, people are watching tv to keep busy and looking to be entertained. Not even!
Tried to watch Green Leaf too, I got nothing from it. Nothing on OWN thrills or moves me. Watch Dr. Phil until he starts bragging about who he knows and his accomplishments.
Fancy clothes, terrible acting! I’m off, back to the monotony of regular life!

Hey, can’t wait to see Love and marriage Huntsville, Ready to Love…. When will the shows come back on…

So excited about the new seasons of Ready to Love and love and Marriage Huntsville I would love for RTL to do like a follow-up of the couple’s to see where they are now after the season ends. Just a thought because I am curious who still together and whose not.

I can’t wait to see the new season of “Love and Marriage Huntsville”,and also “Ready to Love” these are by far my favorites!!

I look forward to watching” Love and Marriage Huntsville” and “Ready to Love!” Can’t wait to watch them again!!!!

My husband,of 22 years, and I LOVE Black Love! Initially I started watching it alone but it lead to such wonderful discussions he watched them all until we could watch them together. The couples are so honest and open about their lives it is truly mature love. Pure inspiration. I’m so happy it’s been renewed!