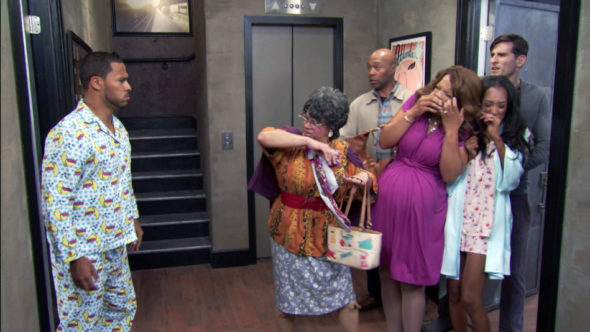 What’s on the menu at the Love Train Diner? Has the Love Thy Neighbor TV show been cancelled or renewed for a fourth season on OWN? The television vulture is watching all the latest cancellation and renewal news, so this page is the place to track the status of Love Thy Neighbor season four. Bookmark it, or subscribe for the latest updates. Remember, the television vulture is watching your shows. Are you?

The fourth season of Love My Neighbor averaged a 0.12 rating in the 18-49 demographic with 459,000 viewers. Compared to season three, that’s down by 39% and down by 30%, respectively. Find out how Love Thy Neighbor stacks up against other OWN TV shows.

While OWN’s January press release didn’t say Love Thy Neighbor is cancelled, it did announce season four as the fourth and final season, so there will be no season five. Let’s face it, it’s toast. Well, it’s toast for the audience. For me, it’s now more like crisp golden toast points, with delectable toppings such as shrimp, smoked salmon, chicken liver pâté, or roadkill Rottweiler. Don’t judge.

While I am fond of saying that even renewals can be cancelled, the reverse is also true. Remember 7th Heaven? Originally, the 10th season was to be the final season. They made an actual series finale for the end of season 10. In the meantime, the now-defunct netlettes — The WB and UPN — were circling the drain, so Warner Bros. and CBS cooked up The CW, which renewed 7th Heaven for an 11th season, to help kick off the new network. Because of that, I’ll keep an eye on the news. In conclusion, if you want more Love Thy Neighbor cancellation and renewal news, subscribe to this page.

What do you think? Is this TV show ending at the right time? Do you wish OWN had renewed Love Thy Neighbor for season five, instead?

Please vring back season 5 for this shows . It is well deserve for us fans to continue watching this hallious show. We need the laughter. Hattie is a very good actor and we love her devotion to the show. Love all the other characters as well.

Please bring back the show it left us at the end with drew and Sam please bri g it back Tyler perry .

I’m so upset, I’ve known about the show for the longest as I am a fan of Tyler Perry’s works. And I knew the show was popular, so I finally got to watch it when I discovered it on Hulu and I binge watched it so much. I get to season four’s ending to find a cliff hanger. It’s so wrong and upsetting. This show has me hooked like no other show has in a very long time and I’m so saddened to see that it hasn’t been renewed. I don’t know how things work but I hope to see… Read more »

Please bring it back love that show its not fair !!!!!that youall have us hooked to the show and end it like that SEASON 5 please #love thy neighbor!!

Please bring the show back, to end the season where it ended was horrible!! The show is funny and the cast was great! Drew and Sam deserve a chance past the season four ending, we viewers deserve a better ending. This cliff hanger is too much! Please please bring a season 5 back!! Thank you !!!!

Loved the show , it was down to earth. Why leave me hanging with Drew an Sam
It was so very good, bring it back . Please .
Thank you
Devoted to the show

Please bring it back…why end the season like that if you were only going to cancel it. I enjoyed and look forward to watching the show every week. Please bring back ASAP.

So disappointed, I found the show on Hulu and watched it and I really liked it. The show was funny and hit the right spots, I wanna know about Sam and drew they finally told each other how they felt. Someone please pick up the show

How dare them not make season five . Drew and sam was finally honest . That show showed true family and friend value hope they decide to renew . I’m very upset about that and I’m sure other people are too

Please renewed season for season 5. I love this show! Hattie sometimes have me on the floor lol! Bring this show back along with meet the browns

I was a weekly viewer of “LOVE Thy Neighbor”. I looked forward to watching every week.
I am really so disappointed by its cancellation.
I will miss All of these Characters. Everyone was so funny.
SO sorry the show is no longer on. BUMMER !!