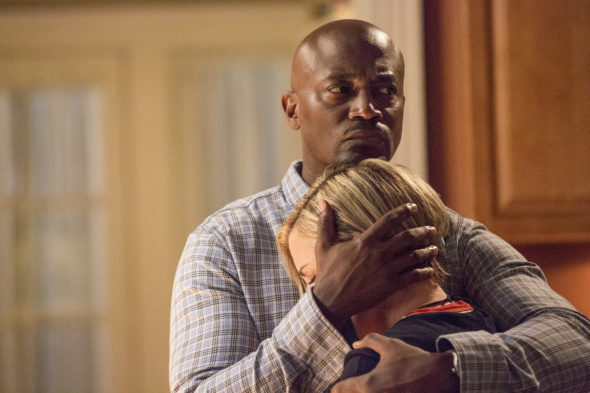 The Hollywood Reporter cites a ratings decline as the reason TNT chose to cancel Murder in the First. Here is more, from THR:

The decision hardly comes as a surprise for the cop drama starring Taye Diggs and Kathleen Robertson and co-created by Bochco and Eric Lodal. The series wrapped its three-season run Sept. 4 with just more than 1 million viewers — down considerably from its series debut of 3 million-plus.

The determination to cancel the drama, produced in-house, comes as TNT topper Kevin Reilly has been looking to refocus the cabler toward edgier fare. Gone is veteran Rizzoli & Isles and in its place are series like Michele Dockery entry Good Behavior and the adaptation of Animal Kingdom.

Murder was one of a dwindling number of scripted originals that were greenlighted before Reilly’s arrival at TNT. Still remaining are Major Crimes and Eric Dane starrer The Last Ship.

We have been tracking the ratings for Murder in the First, season three, and our numbers jibe with THR‘s analysis. The third season of Murder in the First averaged 0.23 in the 18-49 year old viewer demographic, and drew an average total audience of 1.367 million viewers.

What do you think? Are you a fan of the Murder in the First TV series? Do you think it should have been cancelled or renewed for a fourth season on TNT?

Stinks!!! Another show with no true endinf

I wish I would’ve known about the show sooner. I stumbled upon it on Hulu and now my boyfriend and I are addicted. I’m on season 2 and just started yesterday. I must say I’m a little dissapointed that the series is short lived. I’m a TV junkie and the fact that I didn’t know about the show really speaks to the lack of advertisement.

I so agree with you. I too stumbled on this show on Hulu…had I known a out this show is would have been a fan alot sooner. If anything I hope another network picks it up. it seems like networks advertise the garbage shows more so than the good ones.

MIF was one of my favorites. If they take off “major crimes”, next, I will have no use for TNT.

loved this show and its stars…BUMMER

My husband and I greatly enjoyed and looked forward to “Murder in the First” year after year. We think the plots were very interesting, inventive and the characters true to life and believable in the circumstances they lived and worked in. We consider it a loss of a good program.

I am so disappointed that it has been canceled. I enjoyed Murder in the First!!!! All three seasons although season 3 was my favorite. Bring it back!!!!!

Some shows take longer than others to find footing and establish broad base of viewership/audience. With strong appealing lead characters and topical compelling story lines ‘Murder in the First” (substantially aided by the guideance of well proven hand of Steve Bochico) seems well positioned to be such a program. Obviously MIF already has a solid base on which to build. Providing this show additional support (promotion / new “next level” casting and or story element) would seem a worthwhile…even smart…option as opposed to the often wasteful choice of cancellation

Dang! One of the things I looked forward to every summer 🙁

wow i am soooo bummed this show is canceled………..this was a great show , a great cast with great stories !!! another good show canceled only to replace it with something (in my opinion ) that is not on the same caliber i tried getting into animal kingdom but really…….i feel individually these are good actors in the show but again ellen barkin as smurf really lol…………….and so again a good drama is canceled………i will miss the show tremendously………….i would have rather seen major crimes canceled…………..that show just seems dated & the actors are so not edgy………….murder in the first… Read more »

This is a show I really enjoy. I like the chapters/actors and the storylines. The show will be missed.

Great characters and convoluted but believable story lines. Too bad we won’t be able to see what the writers would have done to end the series. Very short sided on TNT’s behalf. Currie Graham was just perfect as Siletti. Never did catch Kathleen Robertson in her earlier roles on TV but I sure did enjoy watching her smart character here. I will miss all the characters, Shame on you TNT!

Well, This Sucks. Murder in the First is a Great Show. The Almighty Dollar strikes again.

This move clearly has nothing to do with the ‘almighty dollar’ and everything to do with content. TNT has renewed other shows with less ratings recently… Just like TBS, a new leader has come in to TNT and decided to skew younger, go edgier, and shake things up. As you’ll notice all the shows that are geared towards older people are being axed.

It’s always about the Dollar.