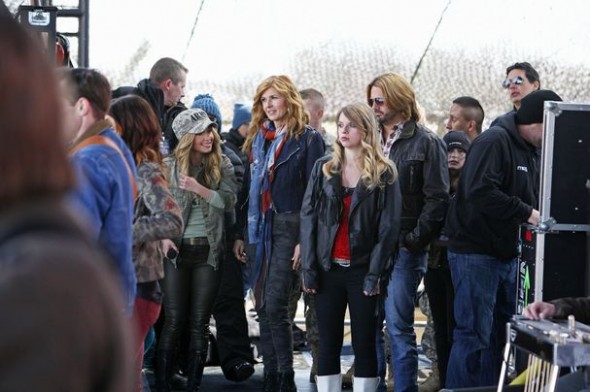 I love this show. It has to go for many season. Keep filming. I will be so so sad of it is cancelled.

This is one of my favorite show and so thankful there will be a season 3. Can’t wait until it starts back. Hope it continues for a long time to come.

I love the show! It is my alltime favorite show. Let’s see a Season 3!

Great series.
Pleased to hear that there is a new season

Nashville is my favorite show. Right now I’m rewatching seasons one and two and waiting anxiously for season three.

Love this show pls pls keep it going !!! its my fix!

My absolute favorite show! Tix drama paired with the music is amazing! Can’t wait to go to Nashville this week to visit the Bluebird Cafe and hear Chip Esten perform live! Wish Connie Britton was performing with him!

Love, Love the show, So glad Nashville will be returning next season. Great actors,so much talent. Songs are wonderful. Hats off to the song writers. Love the storyline. Looking forward to the new season.

Love this show – thankful it was renewed!

Luv, luv, luv this show. Never miss an episode because I have it on automatic taping.
Thanks ABC, u done your viewers RIGHT !!!

I’m so glad there will be a season 3. This show us by far my favorite.

absolutely love his show its an amzing show glad there will be season three!!!!!

I love this show and think the characters are developing beautifully. Always something gone that brings me back week after week. Keep it filmed in Nashville! That makes this show more “real” to me!! I’d love to go to the Bluebird next time I’m in Nashville!

So glad to see Nashville is coming back, love the show and seeing all the amazing actors sing!! They are all so good- its really amazing that a TV show actually as real talent that can act and sing !!