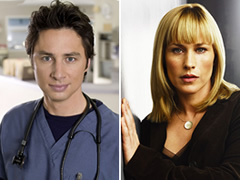 Today, NBC announced their yearlong primetime schedule in New York. Though no one truly expects the peacock network to stick to this plan for very long, it does give us an idea about which shows will and won’t be returning for the 2008-09 season. Since news has been steadily trickling down for some time, there aren’t many surprises.

Returning shows for Fall 2008 include 30 Rock, The Biggest Loser, Chuck, Dateline, Deal or No Deal, ER, Heroes, Law & Order: Special Victims Unit, Life, Lipstick Jungle, My Name is Earl, and The Office. No big surprises there. Interestingly, NBC has scheduled Life for 10pm on Friday nights — the timeslot that killed Las Vegas. Do they really think it will succeed or are they trying to kill it?

For the winter schedule, the peacock network is bringing back The Apprentice (celebrity version), Law & Order, Medium, and Friday Night Lights. FNL was renewed for 13 episodes and they will begin airing in October on DirecTV. They’ll start running on NBC a few months later. Obviously the satellite TV provider is hoping that fans of the show will subscribe to DirecTV so it will be worth their while. We’ll see.

America’s Got Talent, American Gladiators, and Last Comic Standing are scheduled to return for Summer 2009. Gladiators could return earlier if another show tanks in the meantime.

We pretty much knew about the season’s losers. Bionic Woman, Journeyman, and Las Vegas won’t be back next season. Scrubs is leaving NBC but will return for a new and final year on ABC. We’ll have to wait until ABC’s upfronts in May to find out if the sitcom will air in the fall or the winter.

The fate of Law & Order: Criminal Intent is up to sister channel USA since they have been airing it first run. No word when that one will be decided.

As expected, a new Knight Rider series has found a spot on the NBC schedule beginning this fall. Las Vegas creator Gary Scott Thompson will be the showrunner so it would seem he’s not holding a grudge over the Vegas cancellation. The peacock network is expected to give the sequel series a big push and has scheduled it for both Wednesday and Saturday nights. Let’s hope it fares better than Bionic Woman did. Stay tuned!

I cant believe las vegas is not returning this fall, the season finale left us wanting more and I couldnt wait to find out what happens !!! NBC she rethink this one !!

i cant believe passions left tv i,m so in shock and upset about its a shame some people didnt like it but most did I thought i hope the people that started it will do what they can to work hard to get it back one day I love passions it was want i looked forward to watching everday for 1 hour it was so nice . go passions. i wish i could had kept it going because days has been on for over 40 years why cant passions do the same/ dont understand

I am really disappointed to see that Las Vegas will not be returning in the Fall. I think it is a great show and really tried never to miss a show. I really looked forward to it on Fridays and I thought it was in a really good time slot as well. It will definitely be missed – maybe another network will pick it up like Scrubs which is another of the really good shows that NBC let go of. I hope NBC does not suffer for letting shows that people really enjoy get cancelled.

Upset over Journeyman’s cancellation. I don’t believe NBC has clearly given thought to some of the shows they cancelled. Journeyman had a good developing plot in its first season. It had potential and I was looking forward to its sophomore year.

How do i find out when life,heroes,and rescue me are comming back on and what dates ? anyone!

I Dont understand how this Tv cancellation thing works.As a matter of a fact it dose not work.The reason you put on the show is to plz the croud But this year alone you have gotten rid of some of the best showa thought up and not to mention we had to suffer because of the writters strike and then you wNT PEOPLE TO WATCH THE NEW GARBAGE you put on.Think about how the people suffered this year we lost Casmier Mafia,Moonlight,Journeyman,New Answededam,and Girlfriends each gone .And the least have the dencencey to write an ending to each one of… Read more »

I don’t know what to say!! I never figured that Shark would get chopped!! That is one of the better shows on television today. What is the matter with these people?!?!

I really liked Bionic Woman. I watched it online every week and I was hoping it would be renewed somehow, even after I heard the rumors. So Sad!

why the hell do they keep garbage shows like gossip girl but throw away good **** like JOURNEYMAN?

I hope that putting Life on Friday night won’t be the end of it.

I am sad about the placement of Life. I really enjoy the show, and it is a shame that the people who would probably watch the show will be out on Friday nights enjoying their lives.

quantum leap is back on watch that!

Really disappointed that Journeyman will not be returning for the fall