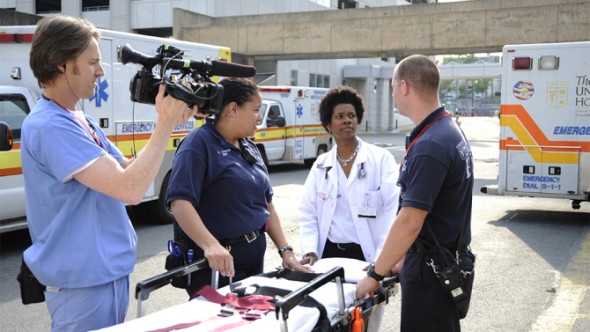 In 2012, ABC introduced the NY Med TV show, a series that follows the work of real-life personnel of New York area hospitals. The show didn’t return for the summer of 2013 but resurfaced for another season during the summer months of 2014.

Now, it appears that NY Med is gone once again. The network has announced their TV shows for the Summer of 2015 and NY Med isn’t among them. They could certainly bring it back for a third season next year but, at least for now, it appears the show is over.

What do you think? Do you like the NY Med series? Should ABC bring it back for a third season?

Love this show. Hope it comes back.

Yes bring it back! #WeWantNYMed

Yes, bring this show back! #WeWantNYMed

Super disappointed that they cancelled this show. This was one of the best shows and they cancel it?!!! Makes no sense

I’m in the UK and the few we have had screened have been fascinating. Please don’t say they’ve ceased production. I’ve loved all the stories including that of staff.

Please bring it back it was one of the best raw shows out there!

I love this show hope it comes back on

I wish it would return . It was one of my favorite shows.

I wish they’d bring NY MED back it was the dose of reality you just couldn’t get from Grey’s Anatomy. Everything was raw and unscripted. Plus, you never knew what would come through the doors of the ER. I’d sign a petition to get the show back on the air, even if it’s not on the same channel it was on before. (Don’t let FOX or Oxygen get it though.)

Angry that NY Med I is not returning. I loved this show.

So sad to hear that NY Med isn’t going to be on! I don’t understand why they cancel a show that people can always take something away from watching it, but yet it seems that there is constantly some meaningless new reality show that, for the most, part belittles the participants showing up! TV isn’t what it used to be for sure!

I am so pissed, I loved this show, it was the highlight of my week for tv. Sure, why not?-just take another show that people like away. Makes perfect sense doesnt it?

NY Med was the best reality show on TV.
So sick of the other mindless garbage.
This show was the only reason I turned my TV on.
So bummed!!
Please bring it back! All of my friends couldn’t wait for new episodes.
Please!!

I think few viewers realize that patients and families were being filmed without prior notice and consent. It is a violation of trust and privacy. The medical professionals wearing secret microphones should be ashamed of themselves. I am glad to see this show cancelled.

Disgusted: Wrong, you obviously have no idea what you are talking about. Every single person from every episode signed a consent form allowing the production company to use what was filmed, in whole or in part, in the episodes that aired. Trust me, plenty of people chose not to consent to any film of them being used in any episodes. This is one of the reasons why it takes so long to shoot enough usable footage to make a season with several episode. Much of what is filmed is never used for multiple reason, not the least of which is… Read more »