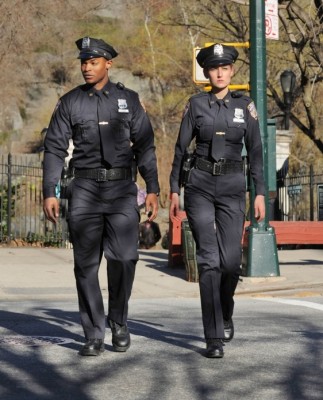 To no surprise, CBS cancelled their low-rated NYC 22 series a couple months ago. Airing on Sunday nights, the new cop show averaged just a 1.3 rating in the 18-49 demographic with 7.67 million total viewers. The network pulled the series in May after four episodes.

Though CBS hasn’t “un-cancelled” the show (as they did with Unforgettable), they are bringing NYC 22 back to the schedule. They’re burning off the remaining episodes on Saturday nights this summer.

The network is kicking off the show’s return with a pair of installments this Saturday, July 7th, at 8pm and will run another set on July 14th. Then on July 21st, they’ll run just one installment, coupled with a Hawaii Five-0 rerun. The Eye network may keep burning off the remaining NYC 22 episodes after that but haven’t announced their Saturday schedule that far in advance yet.

CBS ordered 13 episodes of NYC 22. They aired four of them in April and May and currently have five scheduled for the next three Saturdays. Hopefully they’ll keep airing the series so that the last four will also see the light of day.

What do you think? Are you glad to hear that NYC 22 is coming back? Will you be watching on Saturday nights?

I love this show, did people not watch because it was more real not a lot of making out and sex. Please don’t cancel!!!

I REALLY LIKE THIS SHOW. PLEASE DON’T TAKE IT AWAY.

darn it was one of the few shows we watched. Getting real fed up with “reality” TV and this show was really picking up the pace

I truly enjoyed this program. It was one of the few shows that held my interest.
My kids, 16 & 13, also loved the show. It never ceases to amaze me that CBS constantly kicks good shows and replaces them with “dogs”.

I really enjoy the show and I hope that CBS gives the show a chance to increase its fan base. The actors are excellent and the writers are also excellent.

I would like to see the show continue. It’s not stellar, but it IS enjoyable. I especially like the character of ray, the former journalist. Seems like the writing got a lot better after the first few episodes too. I hope the network gives it another chance. They do need to change a bit I think. Would they really put a whole bunch of rookies out there together, more or less, alone?

Great show. Each one gets better- CBS needs to renew it.

I really like this show. If anything they should just have it as a summer fill in with maybe 10 to 12 episodes in a season. C’mon you CBS execs you have to give it time to fully develop a following. These shows are a heck of a lot better than some of that stuff I see on cable.

Great Show!!! What a surprise to see it continue. Hope CBS wakens and continuse a good series!

NYC22 sucked right from the start, and it’ll continue to suck until it gasps its last pitiful breath. What a DOG!! I was glad to see it go – I suffered through two episodes thinking it HAD to get better… there’s two hours of my life I’ll never get back! Bringing it back is waste of air time, even for a Saturday night.

You probably watch the reality shows, doesn’t your life have enough real in it?

I am glad to see both programs back and I agree they take off good programs and put on a lot of reality crap.

Love the program. Glad it is back. But will it return in the fall?

Michele » No. One of the downsides of being cancelled.

I was so happy to see two great shows back on the air..Unforgettable and NYC 22. They continue to take off good dramas and they replace them with garbage Reality shows. No creativity left in the business anymore???

OK, GLAD UNFORGETTABLE IS BACK, BUT IN THE SUMMER? ARE YOU KIDDING ME, THAT’S LIKE A DEATH SENTENCE………