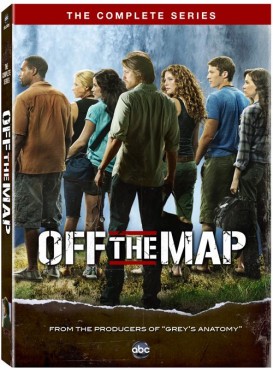 Despite coming from the award-winning creators of Grey’s Anatomy, Off the Map wasn’t a big winner in the TV ratings. The ABC TV series was cancelled after just 13 episodes so, unfortunately, there won’t be a second season.

On the positive side, ABC Studios has released the complete series of Off the Map on DVD. The three-disc set includes all of the uncut episodes, behind-the-scenes featurettes, deleted scenes, and outtakes. It’s being released on August 23rd.

You can purchase Off the Map: Complete Series

LOVED off the map! One of the few shows I could watch over and over again!

I really enjoyed this show. I was sad to see it go.

I can’t wait to see this series again!

Another show they has only just started in Australia, which I liked, but has been canned. At least it will be on DVD.

I loved the characters and the locations.

Loved Off the Map, hate there wasn’t a REAL ending!

So glad I was not the only person who loved this show. Glad they’re releasing it on DVD.

I would love to win! This was the only show my husband and I could agree on.

I think I was one of the few who enjoyed this series, sad it only lasted 13 episodes.

Love to win this Incredible Series on DVD!

I loved this show and would even love it more if I won:) I still believe ABC messed up taking this off the air!

I am so happy they are nice enough to release the series on DVD. It was a great show.

I must of been the only person watching this show. I liked it and was sorry to see it get canceled.