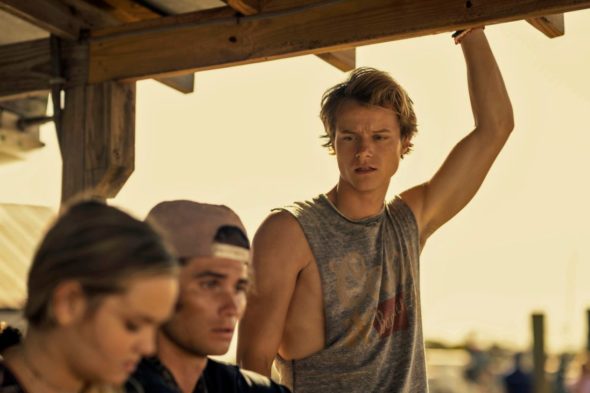 Will there be more adventures for the “Pogues”? Recently, Outer Banks creator Jonas Pate spoke with Entertainment Weekly about the future of the Netflix TV show.

The teen mystery drama follows John (Chase Stokes) and his friends in the search for his missing father on the Outer Banks of North Carolina. The cast also includes Madelyn Cline, Madison Bailey, Jonathan Daviss, Austin North, and Charles Esten.

While Netflix has not yet announced a season two renewal for Outer Banks, creator Jonas Pate says he has plans for at least four or five seasons:

Ever since we started, we always viewed it as something that was probably like a four-season, maybe five-season show, but definitely four seasons. We’ve sort of long-arced it out pretty far. I’m just hoping that we get a chance to actually tell those stories. [B]efore [season 1] even came out, Netflix had greenlit us to write some [season 2] scripts, so we’ve been working on that for a few months now.”

And what are those season two plans? Pate says:

Ward is a very crafty character, as you saw in the first season. He’s very slippery. And he’s willing to bend the truth and do all kinds of things that will drive you crazy because you just want him to get justice, and I think we’ll ride that line a little longer in season 2. But we’ll also introduce some new villains too. So the story will broaden a little bit as we go into season 2.”

Fans don’t have to worry about Topper, either. Pate says actor Austin North will likely return for season two:

We want to continue to develop Rafe’s pathology as he starts to come apart after having murdered Peterkin in season 1. So he’ll play a big part in season 2, for sure. And we love Austin North, we really love the performance that he gave as Topper, so he’s going to play a pretty big role as well. But a big debate will be whether he does the right thing or the class thing, so that’ll be an ongoing story line in season 2 too.”

What do you think? Have you Outer Banks? Do you want a second season?

I REALLY liked the story line, acting and the location. I thought at first there were 2 Seasons. But I was wrong and so disappointed. I hope that the Series continues. The writing is EXCELLENT and each Episode is so good I am so shocked it is over. Please continue the Series!!

Worst part….getting to the end of the season and wanting to continue to season 2,3,4,5 🙂 Can’t wait for season 2!

Loved Sarah and John together! Such a great series…please come out with more seasons…I’m dying to know what happened!

I love this series! Please make lots of seasons! I need to know what happened to John and Sarah! I hope they stay together…so cute!

I AND MY FRIENDS ABSOLUTELY LOVE THIS SHOW!!! PLEASE PLEASE BRING ON A SECOND SEASON, AND ASAP BECAUSE WE ARE AT THE END OF OUR SEATS WAITING!!!!THANK YOU SO MUCH !!
BARBARA WALTERS

Best show in awhile. Please bring season 2. We are ready for it.