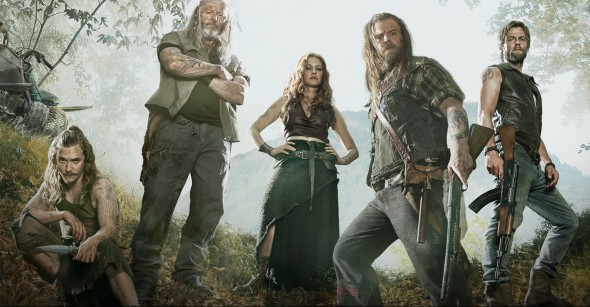 Set in the Appalachians, Outsiders features the tight-knit Farrell clan. Renegades, the Farrells have lived on Shay Mountain for more than two centuries.

Here is more from Deadline‘s report on the renewal:

‘We are thrilled that Outsiders has connected with fans in such a powerful and palpable way, and met our highest expectations on every possible level, thanks to Peter Mattei, Peter Tolan, our extraordinary cast, creative team and partners at Sony Pictures Television’, said WGNA president Cherniss.

What do you think? Are you a fan of WGN America’s Outsiders TV show? Do you plan to watch the second season? Let us know.

also, what are the meanings of the tattoos?
during the theme song by each name??
and the ones they have their bodies?
we need to know this stuff.

can anyone tell us the words to theme song???
pleeeeeeeeeeeez.
ged ged ya

Turn on your subtitles

awesome, on same pace as sons of anarchy and animal kingdom.

Loved the very first show of Season 2.
Big Foster is alive!!
Lil Foster is a tough one too!!
Wow!! So cute!!

They killed Asa and Foster is still alive? This show sucks! done Watching it.

This is a great series, WGN not a very pop channel, but if it was this would be huge. Great story line and cast…I can’t wait 4 season 2

Me too!!
I have been watching the promo on Direct TV and I love it!!
January the 24th can’t get here soon enough!!
Thank You WGN!!
Can’t wait to see Lil and Big Foster!!

I’m so happy that outsiders are coming back

I am so happy that the outsiders are coming back

Love this show!!
Love the music and the scenery as well!!
And did I mention Asa and Lil Foster??
And of course Big Foster!!
Nice looking guys!!
Wow!! What a show!!

i loved this show, i could not wait for it each week. I am cannot wait till season 2.

Me too!!
I loved the Hatfields and McCoys .

Love it!!
David Morse is great just as he was in the movie “Disturbance” and other movies.
Love the music and the beautiful scenery in this show.
Lil Foster and Asa are definitely cuties.