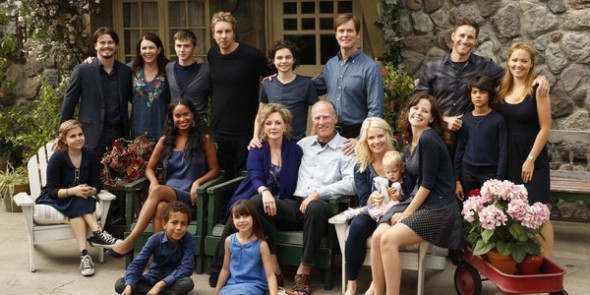 Please renew it and pay the cast. They are a wonderful ensemble and certainly well worth the dignity of a final and financially affirming season . NBC why don’t you pay your anchors a little less and hard working actors a little more. They certainly work harder RENEW !

It figures! NBC sucks. If it’s a wonderful show they decide to dump it to put on some not funny crap w/unknowns. Yup I blame the station. Yes, I can understand the high salaries for some of the cast but not all & the cast is huge. Come on NBC, listen to the audience for a change…. If you think someone is over paid don’t put them on as often – or at all. No one seemed to miss the girl who went away to college, did they? It seems to me that programs like CSI & NCIS on CBS… Read more »

I love this show! It’s funny and witty with first class acting. So many people can relate to it. The story lines of breast cancer and a child with autism hit home with me. It would be a travesty to cancel this show and keep some of the other crap that is on tv these days. Please save Parenthood!

While the series itself has been very good most of the time(a little sappy once in a while), they have been on this price structure for the last 2 seasons. Ever wonder why Grama and Grampa aren’t on for several episodes(her trip to Europe) or the college kids are gone for two weeks or everyone tied to the studio are gone. Peter Krause is the basic lead in this series with everyone else rotating stories around him. I also believe making Ray Romano and his salary a regular broke the camel’s back. The problem with has-been movie actors and B-level… Read more »

I have watched Parenthood from day one and I never miss an episode. I think it is the best show on TV right now and it would be a travesty if it was canceled. Please bring the Braverman’s back! I need to know what happens with Max and Joel and Julia and so many more! Don’t cancel one of the best shows on TV!!!!

Please keep the show on. I look forward to it every week.

This has been a great series and I hate to see it go. It seems to me that the family shows just do not make it for one reason or another.

Dedicated watcher. Please don’t cancel and come to terms. A lit of people love this show!

Parenthood is my favorite TV show. The cast is great and the situations are real and poignant. The script writing is amazing, far exceeding the typical mediocrity of most series.

I love this show, I watched all five seasons in the last month and can honestly say it’s one of the most heart warming shows I have ever watched. I love the storyline, the characters… everything! I would really like to see at least one more season if not many more.

I think it shall come back , nbc should give them a cgance

I really hope it isn’t cancelled- I LOVE Parenthood!!!!

Parenthood is a good show. Not a great show but it certainly is better than most of the junk on TV these days. We watch it faithfully and like the characters and the actors. The writing isn’t always stellar but it is a family show and it doesn’t seem fair that it has been put up against some of the best shows on TV. How can you expect it to succeed if it’s showing opposite Scandal or Grey’s Anatomy? I hope it succeeds with a FULL season.

great show and I want it renewed, but not competing with Grey’s Anatomy. there were different times

Parenthood should not canceled. It has the best acting. It is the best show on tv

OMG I watched all 5 seasons in one month time. Loved the show. I have 5 children and I can relate to each episode. I am so disappointed that the show is being cancelled.

If it is true that they have asked this cast to lower their episode guarantees to nine episodes, then (based on my experience in this area) my guess is that it less likely to be an ‘impasse’ and simply more likely that everyone is working through a negotiation process.