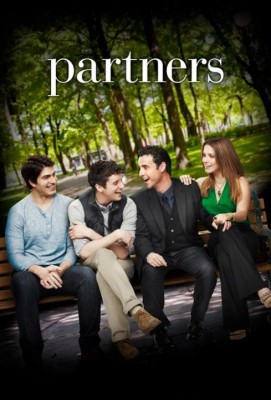 Saw 1ep and loved it, can u tell me is there just 1 season…paul from Australia

The story is gay cute but not funny.

CBS needs to bring Partners. This show was awesome. You didn’t even give it time. The actors were hilarious and just clicked. Sometimes you just know a hit and this is one . Michael Urie is the best. Please bring it back.

This show was great! I can think of so many other shows that should be cancelled! I haven’t laughed at a show like this one in a while. The cast is amazing, especially the actor playing Louis. It was nominated for New Comedy too why did they pulled it so soon?! I think another Network should pick it up ASAP. Really disappointed that the show was cancelled. They should cancel two and a half man or glee

It was one of the best shows on TV. I Don’t think CBS should cancel Partners. Cancel one of these shows instead Revolution, Hawaii Five-0, Mob Doctor .

Why was this show cancelled? The writing, casting, acting, including wonderful timing and non-verbal nuances, are all excellent! It is more realistic and doesn’t go for the “cheap” quick-laugh moments that many other shows do. There are not that many higher quality shows out there. It is very disappointing when one comes along and is terminated before given a chance.

It was the best show I was watched this season on TV, and totally disappointed to learn it’ s been cancelled. It was too soon to decide on the fate of it.

Tgis W’s one of the best shows..I’m not watching CBS ever again until they put Partners back on air.

I really enjoyed the show.. It made me laugh harder than any other show since Red Sckelton or Jerry Louis…. Please keep writting and doing the show. The humor is great and my family can relate. I love it….

Partners is/was the freshest, most funny new show on tv. The actors are top notch, the writing is fantastic. Aside from not liking the nickname “hushpuppy”, my family loves this show and was so upset to hear it’s been cancelled. Please bring it back! It’s not caricaturish and stupid, like “Modern Family”, which we can’t stand. What’s wrong with CBS for not giving this show a full chance? What is their reasoning behind cancellation?

CBS, What is wrong with you???????Put Partners back on the air. I don’t think you gave the cast enough of a chance with the viewers out here. I love David Krumholtz . Seeing David back on a show is fantastic!!!!! Please put partners back on CBS. Thank You, Barbara

Too close in terms of premise to the sublime Partners of 95/96, but too far away from that in terms of original wit, humour and sparkling performance. If this is a hit, the US sitcom really has passed on.

I’m so confused right now. I really adore all the actors. I’ve seen a lot of movies/shows with them and they have great potential. But…and unfortunately it’s a big BUT…the show is not how I expected it to be: funny, interesting and a bit like “Friends”. Partners is far away from Friends – which could be a good thing but in this case it means that most of the time it’s not funny, extremely stereotyping and superficial. I love Michael Urie but his character starts to get really, really annoying. I really want this show to be a hit because… Read more »