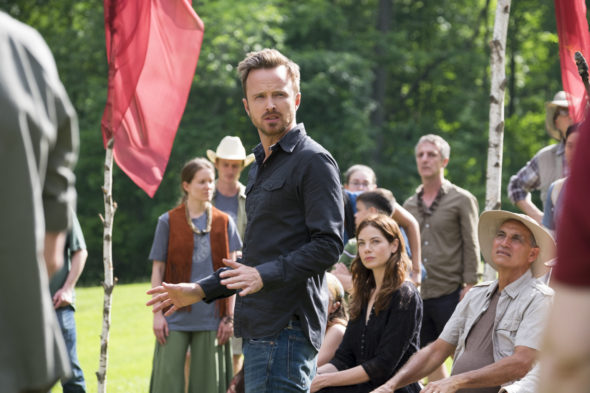 What do you think of Eddie Lane’s leadership during the third season of The Path TV show on Hulu? As we all know, the Nielsen ratings typically play a big role in determining whether TV shows like The Path are cancelled or renewed. Hulu and other streaming platforms, however, collect their own data. If you’ve been watching this TV series, we’d love to know how you feel about The Path season three episodes. We invite you to rate them for us here.

What do you think? Which season three episodes of the The Path TV series do you rate as wonderful, terrible, or somewhere between? Should Hulu have cancelled or renewed The Path for a fourth season? Don’t forget to vote, and share your thoughts, below.

The Paths’ characters, like Sarah & Eddie’s dead brother’s old girlfriend, made me realize, they’re acting out their part but, those behaviors, unfortunately most women possess…! Although, the path, infuriated me so, was having such petchulant, pety, women in the script indictitve to how one looses themselves to a cult in the 1St place??? Being of weak mindedness or of self… The characters of the women mentioned, absolutely turned me offf. It’s hard to fathom, such behavior does exist… Scientology is the cult most like the path. Again, not really sorry to see it go…! What I would love to… Read more »

I am really sad to hear The Path is cancelled. It was one-of-a-kind and I really looked forward to seeing what was going to happen with Eddie leading the movement. I wanted to see what would happen with many of the characters. Even Cal, who I despised throughout the show, was starting to grow on me. I wish they could have at least had a true “Final Season”..

I think The Path should not have been cancelled. I think it warranted a 4th season. It would have been interesting to see how Eddie might have been able to lead Meyerism as a positive movement.

I completely agree, Jamie. Anyone who I have introduced the show to has loved it. I just don’t talk to many people who have actually tried to watch it. Not sure if that’s what caused the cancellation (viewers)?