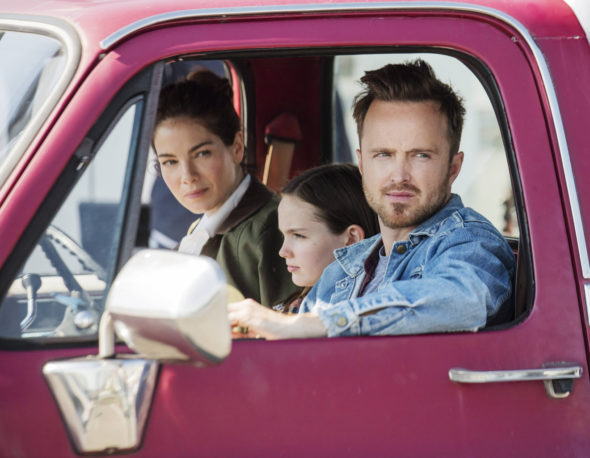 Eddie Lane’s struggles with Meyerism are returning soon to a television near you. Today, Hulu announced the third season of The Path TV show will premiere on Wednesday, January 17, 2018. Originally titled The Way, The Path first debuted in March of 2016, and season two dropped on January 25, 2017.

Check out the Hulu press release, for more about The Path season three.

Season 3
Premiere Date: Wednesday, January 17
Episode Count: 13
Cast: Aaron Paul, Michelle Monaghan, Hugh Dancy, Kyle Allen, Emma Greenwell, and Freida Pinto.
Crew: The Path comes to Hulu from Universal Television, True Jack Productions, and is created and executive produced by Jessica Goldberg. Executive produced by Jason Katims and Michelle Lee.
Synopsis: A miracle by Eddie Lane went viral, and Meyerism has grown exponentially across the world. As the new Guardian of the Light, Eddie is forced to face the question of whether he can grow the movement without becoming a cult leader.  Cal is haunted by dark demons from the past and must come face to face with them in order to defeat them.  Sarah questions her faith, and in looking outside the movement for answers, she may discover one of Meyerism’s deepest secrets, and the one person who could put an end to it all!

What do you think? Have you watched the first two seasons of The Path TV series? Do you plan to stream season three on Hulu? Let us know, below.